House Hunting and Returning to The City 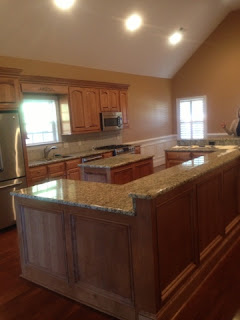 So, my flight was cancelled and rebooked for a day later, giving me an extra day to enjoy my time in the south. With my extra day, my mom and I saw what seemed like a million houses with a very kind and patient real estate agent. To the left you'll find a photo of the kitchen in one of the houses we saw. The kitchen was literally twice the size of my bedroom. I almost fainted. It was glorious. I wanted to lay down on the marble countertops. But I didn't. But I wanted to.

One of the weird ways living in New York has manifested itself in me is that whenever I see a large space, I just want to move in with absolutely nothing and live in the emptiness. I'd like to lay on the floor and stare at the ceiling and make snow angels in the lack of dust and dirt a newly cleaned house would have. And I'd like only to use the microwave and never dirty the kitchen. But have the kitchen nonetheless. And eat cereal sitting on a bar stool at the counter. And of course i'd have a house keeper, and she'd clean everything else.

But in reality I alway make a mess, and somehow things accumulate. And I never put them away. Because, really, isn't it terrible the way cleaning never gets permanently done? You always have to do it again. And it's not even enjoyable. So, in my spinsterhood, I really have decided only to do it when I'm absolutely disgusted with the state of my living space. 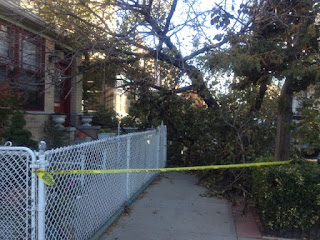 And speaking of my living space, I'm back in the city. I'd like to report that I got a cab in no time flat yesterday without even waiting in line. But When I got to my apartment, I saw I would have a time getting inside. Pictured to the left is my apartment, taped off, obscured by a fallen tree. But we still had power. So...really, now that it's been trimmed, it's really not bothering us. Well...it's not bothering me, at least.

But then I came inside and remembered that I live like a colony of squatters and leave about as much mess. At some point I'm going to have to figure out how to get a real house keeper. I can't be bothered to do it myself. My spinsterhood lends me the luxury of never feeling the necessity of cleaning for company. And what a luxury it is...until I have to get up to go to the restroom in the middle of the night and trip over my still-packed suitcase a month after I've returned from a trip.

But on to other things...

My butt seems to be colonizing my legs, and I blame Snickersbinge 2012 among many, many other things - or perhaps more accurately - meals. So, this morning, I may have compounded New York's need for disaster relief by causing small tremors in the earth as I jogged in my stretchy pants down the frigid streets of my neighborhood. If there's anything to make a girl want to work out more, it's being seen in public in stretchy running pants. That should very possibly be used as a form of punishment for eating innumerable fun-sized Snickers for breakfast for days on end. In fact, now that I think of it, it effectively was.

But the point of even starting that paragraph was to say this: The news media is all about what a disaster hurricane Sandy was for Queens, but it all pretty much looked the same to me. So...they need to calm down and state the specific neighborhood in Queens more often. It was the Rockaways, which are much closer to Brooklyn and, debatably, should actually be part of Brooklyn.

But in any case, that is all. I'm sitting in my bed in all my clothes at 4:34 pm on a saturday. Under the covers. Livin' it up Spinsta Style.