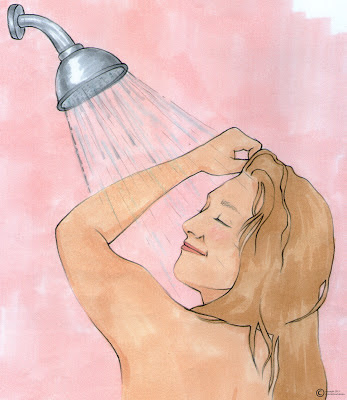 When I was in college, I relished the idea that I didn't have to shower every day. In the first year, I suspect that had something to do with the fact that it was a hall shower, and I had to wear shoes. The rest of the time...I don't know. My one rebellion?

Now, though, I relish the idea of a good shower. In fact, I do some of my best thinking with the water running over my face. (Most of the time I think about the time my friend Jason told me that sometimes, when he writes his name, instead of an 'o' he puts a little tiger paw, but that's beside the point.)  So I try to get in at least two showers a day. But, as a shower takes roughly 15 minutes, and the after-shower ritual of drying, robing, etc probably comes in at around 5, theoretically, I could take 72 showers a day. Of course, that's only if I didn't sleep. But think of all the good thoughts I'd have!

Bonus: Since I'm a spinster, I can use all the hot water and leave my clothes on the bathroom floor. You should try it sometime, but I'm guessing you already have.
Labels: 31 ways in 31 days Shower Spinsterhood Valentine's Day