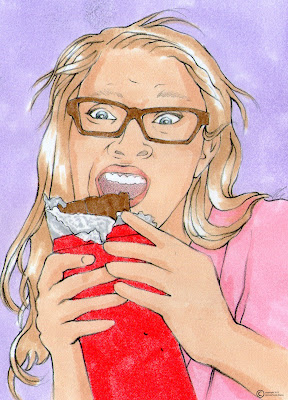 When I was in my last semester of school, like everyone else, I started applying for jobs. The country was in the middle of a recession, and the job postings were scarce. Not only were postings hard to find, but I had no idea what I was doing. I'm pretty sure some I gave some HR departments a good laugh by submitting my resumé for Senior Designer Positions. To this day, I cringe at the thought. So, today, I want to give a little guide to the design team hierarchy, starting with the lowly intern.

1. The Intern (Entry Level)
What you think you'll be doing: Learning about design teams, giving your input as a hip, young team member, and impressing your manager with your creativity, making a quick transition to a full-time, paid employee.
What you'll actually be doing: Making copies, making binders, organizing samples, reorganizing samples, steaming samples, burning yourself with the steamer, filing a mountain of papers your manager has been saving for whatever intern her or she gets, running errands, working incredibly hard in hopes of being noticed and getting hired full time, fighting with the printer, and potentially getting coffee.

3. The Assistant Designer (1-2 years of experience)
What you think you'll be doing: Designing things, sketching flats, CADing prints, giving valid input on designs, getting lots of contacts via LinkedIn for Associate Designer positions.
What you'll actually be doing: Making line sheets, making sketches that you'll then re-sketch and re-sketch again, printing, photocopying, organizing samples, tagging samples, recoloring prints (depending on where you work), updating and re-updating tech packs and BOMs, mocking up samples,  running around like crazy, being guilted into working 12 hour days, getting familiar with the takeout options around your office, plotting revenge on the malfunctioning printer, calling your mom to complain and cry about work.

4. The Associate Designer (2-4 years experience)
What you think you'll be doing: Designing things, getting your way, having more input than you had as an assistant designer, fooling your non-fashion friends into thinking your actually very high up and important.
What you'll actually be doing: Sketching your own ideas, changing your sketches to someone else's ideas, CADding prints (depending on where you work), mocking up samples, creating tech packs, creating BOMs, updating BOMs, being the Designer or Senior Designer's right hand, wondering when you'll get to really design something that stays that way at least until the proto stage, getting really good and really fast at Adobe Photoshop and Illustrator, realizing you would much rather have pad thai for 9 PM office dinner than a stupid salad, posting photos of kittens in your cubicle to boost positive feelings, crying less often, becoming passive-aggressive with the printer.

5. The Designer: (4-6 years experience)
What you think you'll be doing: Getting your way (finally), designing everything, impressing everyone you know with how important you now are, having an easier time dealing with all your cross-functional partners.
What you'll actually be doing: Trying to figure out what someone actually wants you to design so you can preempt the re-sketching process, guessing wrongly and still having to re-sketch, trying the just-knock-off-the-sample strategy and discovering that doesn't work either, start drinking more caffein, keeping a secret stash of chocolate in your desk (if you haven't already started at this point), forging actual friendships with your desk neighbors because you spend more time together than with anyone else, keeping a pharmacopia of different kinds of headache medication in your desk drawer, wondering if the security guard is single because you don't know any single straight men anymore, wishing and hoping for your first assistant or intern, starting to mutter "baby kittens" to yourself under your breath as a calming mechanism, staying late so you can have the printer all to yourself.

6. The Senior Designer (6-9 years (estimate))
What you think you'll be doing: Being in charge!
What you'll actually be doing: managing an intern, an assistant, and/or an associate designer in addition to going to a million meetings, making your own design sketches and then fighting with your merchants to get your designs at least sampled. And then more meetings. The good news, though, is that at this point, you have effectively severed ties with the printer and now only communicate with it via one of your assistants.

7. The Design Director (unclear)
What you think you'll be doing: Being really in charge!
What you'll actually be doing: Probably being in charge? I don't know. I can't even imagine making it this long in the fashion industry.

8. The VP of Design (unclear)
What you think you'll be doing: Really being really in charge.
What you'll actually be doing: Being sort of in charge of design, but mostly going to meetings and being told what to do by the Presidents and things. At most design companies, as a designer, the highest position you can achieve is Vice President. The presidential roles are saved for the likes of those with an MBA, and understandably so. Hopefully, though, by the point anyone reaches "VP of Design" status, they've since stopped crying in the street but are potentially still keeping a secret stash of chocolate in their drawer. I like to imagine that, at least.
Labels: assistant coffee crying design fashion fashion design fashion designer hierarchy printers