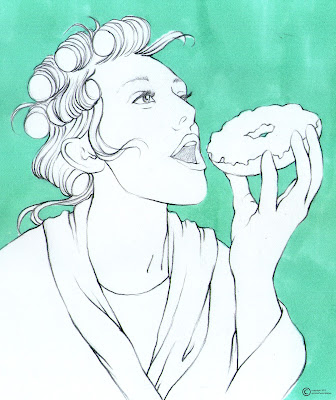 One of the things I like to ask people about is how things around their house were in the morning growing up. I can barely function as a human being with the whole apartment to myself in the morning, so I love to hear about other people's routines. Some people didn't eat breakfast at all, and some people had an actual meal all together at the table. At my house, it was a little bit of a free-for-all.

One of the coolest things about my mom is that she let us eat anything we wanted for breakfast. Though I was allowed to eat pizza or lasagna or ice cream for breakfast, I have always been a little bit of a creature of habit. I think I ate S'mores Pop Tarts every single morning for two years, and then I switched to Cinnamon Toast Crunch for another two.

But food isn't what I mean when I'm asking about mornings at people's childhood homes. Breakfast at our house looked like this: My dad is a super morning person, and was all a-chatter singing and walking heavily around the kitchen, probably just having come home from work for breakfast and to take us kids to school. My sister would sit at the bar in the kitchen, her hair in curlers, waiting for her onion bagel with grated cheese to toast. My brother was a cheerios man for a long time before he graduated to egg sandwiches in middle and high school. My mom stood behind the counter in either her pajamas and thick glasses or a long tee shirt with mid-calf length leggings (ready for a serious power walk), making sandwiches or scrambling eggs.

Once we were all ready to go, we filed out to Dad's navy blue 1976 Cadillac and looked to our right to see if the Coffmans were getting in their grey Olds. Every morning we raced the Coffmans to school The entire seven minute drive was a flurry of excitement on the velour seats. Sometimes Dad would even cut through the parking lot accross the street from Wilson Hall, and Joel Coffman, the younger of the brothers who was in my class at school, would insist in his Indiana accent, "that's illeeeeegal!" One morning, the Coffmans even blocked the end of our driveway so they could get a head start.

Now the Coffman boys are a pilot and a professor, if I'm correct, and my brother, sister, and I were scattered across the east coast until Rachel moved to Louisiana, nearer the Gulf. I am sure, though, we all practice our morning rituals wishing that our day was starting with something as exciting as cutting through the parking lot of a Methodist church in a Cadillac that could have been mistaken for a hurst.
Labels: breakfast cars hurst neighbors racing school