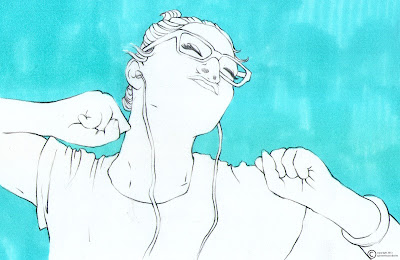 Sometimes you can tell a lot about a person by the music they like. And then sometimes you can't. Either way, it's a fun thing to ask people at a party.

Every now and then when I ask someone what was the first album they ever heard that just really did it for them, I've never heard of the album or even the band that lit up their life. But most of the time, when I ask about the first album that ever blew someone's mind, the answer I hear makes me want to go straight home and make a new playlist. That is, if I'm not already in possession of their most favorite album.

I sang a whole lot of Raffi on road trips with my family. The first CD I owned was Alanis Morissette's Jagged Little Pill. In high school, when I wasn't listening to Fiona Apple's Tidal,  I listened to Weezer's The Blue Album pretty much on repeat in my boxy white Jeep. All of these albums were awesome. But the first time I listened to Beyonce's B'Day, I felt something I'd never felt before.

I downloaded B'Day the day it came out. It was my last semester at the University of South Carolina, and I plugged my ipod into my Dell laptop, watched the bars creep across the download status bar, and headed off to class. With the first slap of bass, I was hooked. By the time I was halfway up the hill on Pickens, I was fighting the urge to dance. And when I clicked my ipod back on after Film Studies, I was ready for more. I wasn't just enjoying B'Day, I was excited to be listening to it.  Every track made me want to move. I had a hard time not participating with the step teams performing in front of the GMP on Hip Hop Hump Day. It was so. stinking. good. 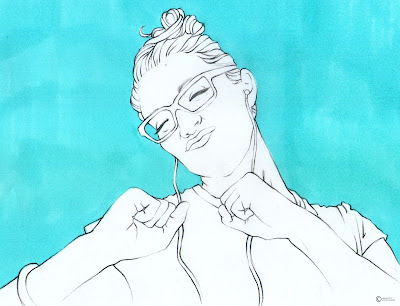 I don't know many girls who don't like Beyonce, but I have to say any ambivalence I had for her ended the day B'Day dropped. Of course, who can be ambivalent about the woman who sang lead vocals on "Bootylicious?" Even now when I listen to B'Day, it just makes me happy. The album is excellent, but because of when I bought it, it reminds me of an excellent final semester of college and how much I loved USC. The real USC, ok? I don't want to hear any of your lip about Southern California. The University of South Carolina was founded first.

School pride aside, though, the story behind everyone's favorite album always has to do with more than just the music. And that's what makes this an excellent party question!
Labels: album bday beyonce california college drawing Illustration music university of south carolina usc