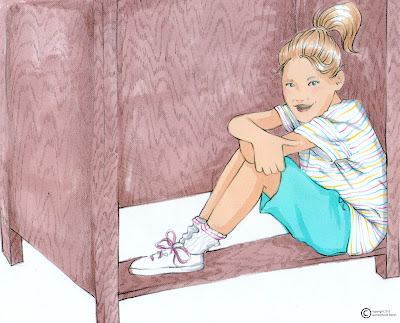 Not everyone liked school, but I'm willing to bet everyone had a favorite teacher. My next door neighbor, Hannah's was her fifth grade teacher, Mr. Temte. Mr. Temte shopped at some sort of surplus store of misfit toys and objects, keeping a stock of items in his room. During the week, he would hand out what he called "Temte Tidbits," as rewards for good behavior, etc. At the end of the week, Hannah tells me, Mr Temte would hold an auction for all the little misshapen, unshipable goodies, and Hannah was so excited to get what she described to me as a "warty sponge." I'm not sure what that was, but I am sure it was magnificent.

The party question here is, "who was your favorite teacher and why?" The names are always fun to hear, but the why is always better. I had a lot of great teachers, like Mrs. Ardis in fifth grade who took a look at my glow in the dark braces in the girls bathroom; Mrs. Gulden, who made up cheers for every letter of the alphabet for the first-graders; and Coach O'Hare who regaled us with stories of his mischievous childhood in Baltimore with a scoundrel named Kenny "Reds" Kessler. However, since Macky is already part of this series, I'm going to talk about our favorite fourth grade teacher: Mrs. Shaw.

Firstly, Mrs. Shaw's maiden name was Outlaw. That, in and of itself, was excellent. We all giggled with glee when she told us this morsel of information about herself. Mrs. Shaw was petite, and she was just...well, she was fun. I remember one day coming in the classroom after school and finding Elizabeth, digger of under-the-fence holes, hanging a very long banner fresh from a dot-matrix printer. Elizabeth was one of the first people I knew to have a computer or the internet. She introduced me to AOL Instant Messenger, and I must say I can attribute my expedient typing skills to her.

The banner Elizabeth was hanging had a big clip art image of a "sexy" woman in a red dress and heels on one end and a round, black, lit bomb on the other. Between the clip art, giant letters spelled out "Mrs. Shaw Is The Bomb." This is actually a true story, and it should, literally, spell out to you how we all felt about Mrs. Shaw.

But now to the part about Macky. Macky was small, wiry, and spritely all through elementary school. She's quite the comely lady these days, but back then she was just a skinny, cute ball of energy. On more than one occasion, while Mrs. Shaw was out of the room, Macky climbed under her desk, and perched on the support bar that ran across the bottom so that her feet wouldn't show underneath. When Mrs. Shaw Returned, she had quite a fright, or at least she pretended to. I'd like to think it was real. But she never got angry with us. She must've just loved kids. Macky inscribed her initials into the underside of Mrs. Shaw's Desk, and I hope they're still there.

Most people have at least a little bit of awesome to tell about their favorite teacher. But with Macky in a lot of my classes, I think my teachers were spurred to greatness and/or hilarity.
Labels: clip art Macky school teachers