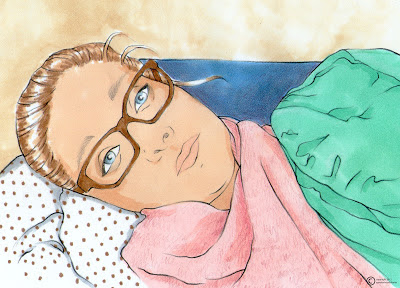 Over the weekend I got a little sick. Well, maybe a lot sick. Don't worry; it wasn't because of the cake.

Anyway, I ended up leaving work early yesterday and taking half sick day. I think in my entire career I've only taken a collection of maybe five sick days at all, so I'm always really weirded out by having a day off and not really being able to go out and do anything.

But, I did do some things I enjoyed today. As soon as I came in the door, I took off my coat and got right on the couch, under the comforter I keep there, and started watching an episode of Investigation Discovery's Deadly Women. The reenactments are bad, and the wigs are worse, but somehow I still find myself sucked into every episode I watch. Four hours later, though, I woke up in the same position in which I had originally gotten on the couch, still wearing my sweater, scarf, jeans, socks, glasses, and everything else. You know I'm not feeling well when I leave my pants on upon entering the apartment.

Next I turned on an episode of Law and Order and fell asleep to that, too. (Side Note: I saw Eric Bogosian at Pret a Manger last week, and I successfully fought the urge to tell him how much i love all Law and Order).

In any case, even though I was sick, I did get to enjoy the sick day. Sleeping on the couch, as I have, of course, mentioned before, is really one of life's greatest joys.