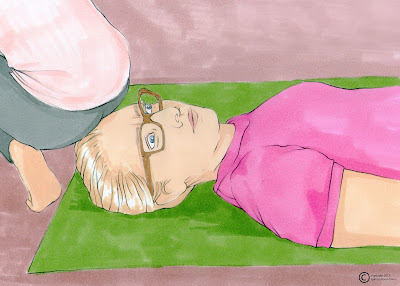 About a year and a half ago, I was running seven miles three to four times a week. Then, I got my wisdom teeth out, threw up on the train, and just got plain lazy. But, with the help of my friend Monica, I've gone to Yoga a whopping two times in the past two months. I know. You're impressed. I'm really trying, though. And I like the yoga. More than that, though, I like the brunch that comes afterward.

This sunday, the ladies and I went to yoga at Yoga To the People on St. Marks place downtown. Behind us was a man in what I can only describe as denim briefs. They weren't even cutoffs. When I got there, he was doing a handstand, and then doing pushups in the handstand. Before class, he told Monica that she should be quiet, and I don't want to call any names, but something smelled of...sulfur...during the class. I think you know what I mean by that.

All in all, the class was really nice and a good workout. I'm still sore right now, but hopefully the more I go, the more I'll be able to take. My favorite part, of course, is the part at the end. The part where you're supposed to relax and lay on your back. This time, I was peacefully enjoying having found my breath when I felt a bit of pressure on my forehead. "What's this?" I thought. And then I realized. The girl behind me, the girl for whom Mr. Brief Jorts had saved a place,  was sitting on my forehead while she rolled up her mat. Her legging-wearing, post-yoga behind was on my forehead. I wanted to say something, but I was too afraid of what someone who can do handstand-pushups might do to me. So I let it go. I just hope she wasn't the source of the...smells.