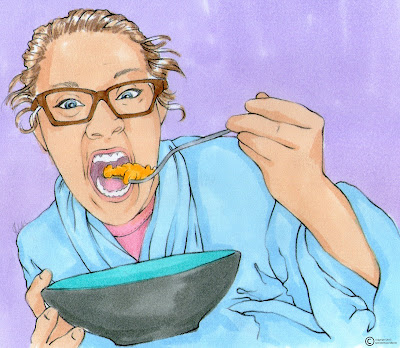 Yesterday I awoke with the same throbbing headache I'd had for three days. After I ate some protein, drank some Gatorade, and took some Advil, the throbbing still hadn't subsided. Every time I stood, I thought my brain was trying to escape my skull. Before my protein-and-gatorade breakfast that morning, I hadn't eaten anything besides toast or plain rice for days.

I went to the doctor, and it turns out I jut had (/have) a massive migraine for which I'll have to see a neurologist today. But, before that was decided, the doctor told me I needed to eat something. I thought I heard a choir of angels singing.

I left the Doctor's office looking for something to eat, but I was in SoHo, so there were only sit-down restaurants around. I didn't have time for that. I needed to eat everything and fast. So, I went all the way back to work and then back out to get lunch. I know that doesn't make sense, but I tried to stop at Pret, and the line was so long I felt panicked.

In the end, I had a bit of a lunch fail. I got a small portion of mashed potatoes and grilled chicken at the Lucky Deli next to my office and didn't even eat it all. I did, however, sit on a piece of chocolate that fell in my chair. I can't tell you how many times that's happened to me since I've worked in fashion. Hint: a lot.

By the time I got off the train in Astoria, though, I knew just what would make me happy as my second "real" meal since food poisoning: Easy Mac. That's right, college food. So above you see the illustration of the total madness I felt as I devoured the Easy Mac. It was delicious, but I'm thankful I didn't eat more than one. I'm not ready for all that goodness quite yet.

So, that's off the neurologist with me. I'm just hoping the causes of my migraines aren't food-related. But if they are, I'm sure you know you'll be able to read my lamentations right here.
Labels: chocolate easy mac macaroni and cheese migraines neurologist pret a manger rice toast