Banana Pudding: Get on that. 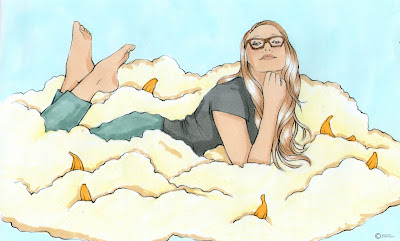 About a month or so ago, there was an office birthday party for which I forgot to bring a treat. Everyone else had brought cupcakes or fruit or something from home, but I had forgotten all together. So, I googled where I could get guacamole near my office, but I knew Chipotle was going to be super crowded. And then it hit me: there is a Magnolia Bakery in Grand Central Station, and they have banana pudding.

For those of you who aren't southerners or haven't otherwise encountered banana pudding, you need to get on that. Well made banana pudding can taste like banana-flavored clouds. Well, clouds with delicious lumps of banana and cookie nestled inside. (You can see what is supposedly the recipe here).

So, I scampered up to Grand Central, past an installation of weird raffia horses, and down into the food concourse to the place of wonder. And alas! At lunchtime, there was no line! Because apparently eating  cupcakes for lunch isn't good? Who ARE these people?

Upon my return to the office I interred my two large puddings into the refrigerator in their paper bag, stapled shut. You never can be too careful in an office full of women with a bakery bag. But I had my treat, and I was sure it would do.

Come party time, the banana pudding was the first to go. People hardly touched the cupcakes, and they were all but licking the banana pudding cartons. I felt like I had won a victory for having had such a lack of planning. A large majority of people had never eaten banana pudding before and were exclaiming things like, "oh my gosh this is good," and, "what IS this?"

I shared about half the small carton with my desk neighbor that morning, in a shockingly uncharacteristic move. Then, I put the rest in the freezer as highly suggested by the cashier. The difference in texture she assured me was worth the freezing. And i can't say I disagree. I won't say the frozen texture is superior to the regular banana pudding texture, but I will say that it comes out a bit like banana pudding ice cream which, let's be honest, is incredible.

So, if you haven' thad any banana pudding, try it the original way first. And if you have had it, try freezing it. You will not be disappointed. This spinster surely was not.
Labels: banana pudding bananas magnolia bakery snacks work