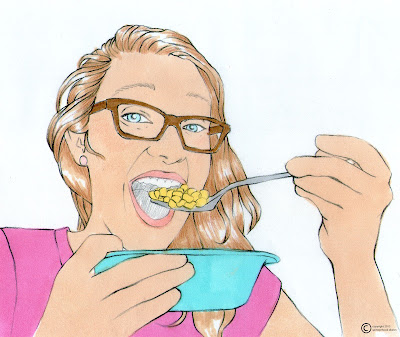 One of the best things about spinstering out hard core every day of the week is the freedom to indulge in your whimsical eating habits. Ain't no man around to say your dinner of Fritos, cereal,  and a handful of Andes Mints is weird.

When I was interning at Li and Fung, I would regularly come home from work around 11pm and dine on about half a jar of chunky applesauce. For some reason that's what I wanted for dinner, so that's what I had. When I would talk about it at work, people would act like it was weird or sad. But you know, I just really needed to get some of that chunky applesauce in my belly. And then, of course, I needed to pass out face down in my bed.

Last night I arrived home around 9pm, and I knew what I would eat: a can of corn with black pepper and Tapatio followed by 1/4 of a chocolate bunny. I washed it all down with a lukewarm glass of water because apparently I haven't eaten ice in so long that my ice is growing tumors. And it was just what I wanted. Nacho Libre would have said, "get that corn out of my face," but I wanted that corn in my face and subsequently in my belly.

So, next time you're eating a can of peas mixed with black beans and a side of hummus chips, know you're a member of a league of free-thinking spinsters. Free-thinking about dinner, that is. I can't speak for any of your other thoughts.
Labels: andes mints applesauce black beans cereal chocolate chocolate bunny corn dinner eating alone food fritos Li and Fung peas tapatio