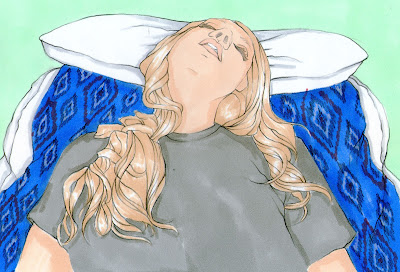 Yesterday I unfortunately had to take a sick day. It would have been a much better day had I not been blowing my nose the entire time, in and out of sleep state, and unable to taste anything. In short, it was a legitimate sick day, which is always sad.

At 5:30 PM, my phone rang, and I answered drowsily, simultaneously realizing I had not just received a baby kitten like I had in the dream I was having, and that I needed to leave my apartment within five minutes to make my appointment with the hypnotist. Needless to say, the conversation was short, and I dashed out the door.

The Hypnotist's office was in a residential building on East 61st street between 2nd and 3rd avenues. It's a building that's set back from the street with giant flower arrangements on gilt tables in the lobby. And, of course, there were gold elevators.

The office was on the 31st floor, and a strawberry blonde woman in her early sixties welcomed me into an apartment I assumed must have been originally decorated in the mid-to-late eighties. All the walls were mirrored from floor to ceiling, and there was a giant flat screen on a chunky entertainment cneter on the longest wall. All around were the little doodads you see in random gift shops, like giant mounted raw crystals, long troughs of zen grass, mystical-looking orbs, and one of those globes whose latitudes and longitudes are gold and whose continents are inlaid semi-precious stone. You know what I'm talking about.

There were two overstuffed off white sofas whose seats and back cushions were covered in a tapestry fabric, and a box of tissues on a table next to the chair the Hypnotist asked me to take. I was glad because I desperately needed to blow my nose.

The whole meeting started like any meeting with a therapist. We talked about the issue at hand - namely, my lack of organization - and why I thought that was a problem. All of it was pretty standard until she started telling me that all of this was a choice, and I just had to choose to become a tidy person. Of course, that sounds pretty obvious, but for anyone who's ever had a problem with any behavior, that's sometimes easier said than done.

After we'd talked for about an hour, the phone rang, and her next client was in the lobby. So, we got down to business. The Hypontist told me to stare at the ceiling while she counted back from ten. On three I was to close my eyes, and ever number from ten until one was a progression of deeper relaxation. It was a lot like the beginning and end of a yoga class, really.

I don't remember exactly what she said after that, but I know that just before she told me I would forget everything she said before that, she told me to put all the thing that I wanted to fix (messiness, disorganization, etc) on a cloud and watch it float off into the horizon. And then she counted from ten again, and I woke up.

I expected to come out of it saying "was I hypnotized?" or "when are you going to hypnotize me?" but really, I knew what was happening the whole time. I just don't really remember what she said. It was nice, though. Really relaxing. It felt like it was five minutes, but in reality it was almost fifteen.

I'll go back for a follow up session next week. Until then, she's sending me a recording of what she said while I was under hypnosis, so I can listen to it and "go deeper," as she put it. I am hopeful that this is going to solve the problem. I'm tired of being embarrassed of my desk.
Posted by Myrna Minx at 7:00 AM