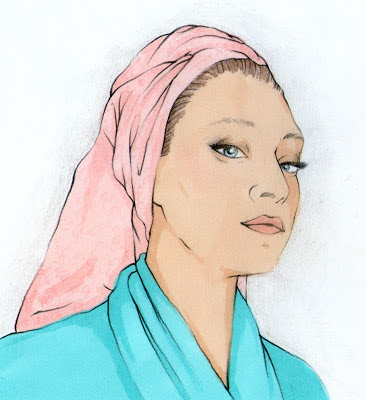 It's a long-running joke between, well, everyone, that when a girl wants to avoid a date, she says, "I can't. I have to wash my hair." But, since I'm a spinster, I never have to use that excuse for a date. I do, however, feel like it might be a valid one.

This weekend my friend Leah was in town, and we were in the middle of a conversation when I realized "aw, man. I have to wash my hair." And that was the end of that. I had to get in the shower, or we were probably going to be late for our engagement.

Now, a lot of girls can probably relate to this because after their shower, they have to blow dry, curl, or straighten their hair. The whole ordeal could take a full hour from start to finish, and while showering is really quite a productive time for thinking, as we've discussed before, when you're in a hurry, it's not quite as enjoyable.

I, however, have a different problem with the hair-washing. In case you haven't realized from the spinster illustrations, I have a lot of hair. I have really long, really fine hair, and it gets all knotted up while I'm sleeping. So, before I have to take a shower, I have to go through the ordeal of brushing out this giant fluffy snarl of hair that, from outside of the bathroom, must sound like I'm just ripping all of my hair out from the root. You have to brush your hair before you shower, though, so that when you get out, you can let it air dry, unmolested.

So, then I get in the shower, and wash all that hair, only to emerge covered in all these mystery strands of hair I could have sworn I had gotten off of me. Hair is like glitter in that way. Whenever you think you've gotten rid of all of it, you still find more. And You can't get it off of you.

And then there's the drying. I'm going to be honest, though, and say I usually let it dry until I"m about to leave the house, and then I throw it in a bun. Because, as a spinster, I can do that. And as a spinster, I can use the excuse, " I can't...I have to wash my hair." But let's be honest, I rarely actually have to make an excuse.
Labels: hair Shower washing your hair