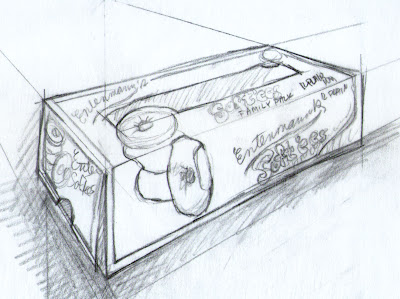 When I first came to see the apartment where I now live in Astoria, I got a little lost looking for the place. The streets are numbered here, but the numbers of streets and avenues are all fairly close, and there aren't just streets and avenues, but also roads, drives, and ways. While I was lost, though, I happened upon something that is dangerously close to the apartment I took and now inhabit: the Entenmann's Bakery Outlet.

I'm not sure what makes it a bakery outlet as I've tasted most of their doughnuts, and they seem fine to me. They're just a little cheaper than they are in the regular grocery store. But, really, "fine" is an understatement. Specifically, my love and obsession is directed toward the Entenmann's Soft'ees Plain Doughnuts. They go stale quickly, but when you first open a fresh box, they're soft, dense, and have just the right amount of sweetness. That is, they're not too sweet. And when you bite into them they have this hearty body that's between a cake and a quick bread which makes me never want to stop eating them.

I'm ashamed to say that this weekend I ate an entire dozen in only a little more than 24 hours. And that wasn't the first time it'd happened either. The last time a boy broke up with me, I did this on a regular basis. Like, at least six times. In fact, even after I started running and working out pretty seriously, I would go to the gym and stop by the bakery outlet on the way home. And then, of course, devouring ensued.

So, I guess I need to say it. Hi, I'm Myrna, and I'm an Entenmann's Bakery Outlet addict.

Admitting you have a problem is the first step. But the steps past the bakery outlet will really be the toughest from now on. But this madness must end! It's one thing to be a spinster, but being a fat spinster with thighs that look like they've been fashioned out of Cracker Barrel's lumpy mashed potatoes may be quite another. I'd like to be able to maintain the idea in my mind that I'm not a spinster because there is no one who will have me (whether or not that is actually the truth is irrelevant), but at some point, after several dozen Entenmann's Soft'ees Plain doughnuts, even I can't necessarily believe that anymore.

Here's to being a cute spinster and having a happy monday!
Labels: breakfast donuts doughnuts entenmann's entenmann's bakery outlet soft'ees