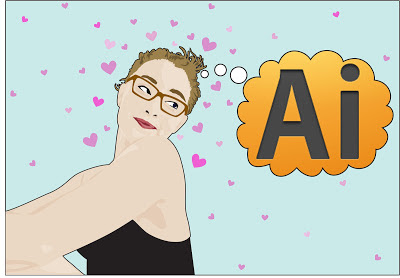 Though I think FIT is absolutely one of the best schools to attend in order to prepare yourself for an actual career in fashion design, there were some things about the industry I just had to learn on the job. This, I'm sure, was as much due to the rapid pace at which the industry was changing as it was to our professors' not wanting to scare us. Now that I think of it, though, they did tell us things like "fashion is a murderer of marriages," and "in this economy you may be interning for a while," so I'm not really sure they were trying to keep us from freaking out...

In any case, today's post is five things they never told me in school, and they probably won't tell you, either. Especially if you're not even going to fashion school. Buuut....they're good things to know. So let's do this!


1. You won't be sketching anything by hand.
In Fashion School, sketching is really important. I'll have to admit that I think hand sketches are so beautiful, and I love to look at them. In reality, though, sketching by hand as a fashion design is a waste of time. Sooner or later, that image is going to need to be in the computer, so you might as well make it in there to begin with. It's easier to color, enlarge, and edit in Adobe Illustrator, so use that tool to its' fullest extent. Lucky for me, I absolutely love Illustrator, but that's not always how it was. It took time, but we have built our relationship into something closer and much more meaningful than anything I've ever had with a boyfriend. And I only get mad at it when I build a file that's too big and make it crash. And, really, isn't that my fault?

2. At least half of your job will be data entry.
At FIT, we did have a Web PDM class (Gerber Product Data Management Software), but it wasn't really seen as all that important. In reality, it wasn't. Each company has data entry software, but not all of them use the same one, rendering anything but on the job training utterly useless. However, once you do learn your company's system, you'll be spending a very significant portion of your time creating, updating, re-updating, and then re-re-updating a database of each season's styles. You'll enter all information from Body shape and style all the way down to what kinds of buttons, labels, and thread you'd like to use. I am continually trying to figure out a way this can be outsourced. As yet, I unfortunately have not come upon a way I can telepathically give anyone the information in my brain without actually writing it down myself.

3. You'll be one of the main causes of global warming.
Fashion office use so much paper. I can't even tell you how much paper is just everywhere. There are printouts of Line Sheets, Tech Packs, full-sized garment CADs, Print Repeat CADs (One copy for you, one for your production partner, and one for each vendor with whom you're sourcing), Cover Pages, and countless other things. And then, every time there's an update, you'll re-print all of these things. And not all offices actually acknowledge that their recycling bins are separate from their trash cans.

4. You can't get a job without knowing all of Adobe Creative Suite, but your boss won't know how to use it.
This hasn't actually been true everywhere I've worked, but the higher up you go in the design hierarchy, the less computer skills you'll find. I actually once had a boss who asked me how to print an email and how to open excel. All in the same day. This is good information for a young person because it makes your skills fairly indispensable. However, as your boss may not have ever used the program, they often have little to no concept of how long something takes. Gently try to remedy that situation at your earliest convenience. It will make your life easier. Additionally, the longer you spend in the program, the faster you'll get, so if you set that timeline structure in place earlier rather than later, you'll find yourself with more and more leeway as your skills develop.

5. A little diplomacy goes a long way.
You can be as talented as you want to be, but if you aren't good at dealing with the people in charge, you're going nowhere fast. I have found this to be true over and over and over again. The more pleasant you are to deal with, the easier your job will be. This seems like an obvious statement, but the underlying truth is this: Fashion, like most jobs, is absolutely not a meritocracy. Unless, of course, the merit being rewarded is people skills.

So, to sum it all up, by the end of your first year as a fashion designer, you'll be dating Adobe Illustrator, carrying a flash drive on your key ring, and perfecting your smiling-through-homocidal-rage skills. On the bright side, all of these are pretty useful things to cultivate. So get to it!
Labels: adobe illustrator design hierarchy fashion design fashion designer fashion dirty little secrets FIT global warming hierarchy work