Men's Fashion Tips from a Spinster 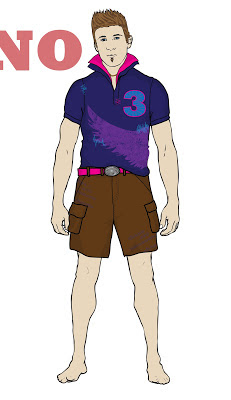 Yesterday on the way home from the grocery store, I saw a man standing outside a laundromat smoking a cigarette wearing a grey one pocket tee, Levi's 505's belted at the waist with a back leather belt, and navy knit underwear. How did I know about his underwear, you ask? Well, he had very neatly tucked his tee shirt into his undergarments. In light of my other sad menswear tale this past week,  I thought maybe today we should discuss five simple tips for men's dressing from a spinster and a fashion designer, though I'm sure we all know this could be an entire book. So, here we go.

1. Don't get too fancy.
The nineties and early 2000's have gone, and with them, the popularity of both the phrase "metrosexual," and the metrosexual himself. A modern woman no longer has any desire for a man whose morning ritual is more rigorous than hers. And thank goodness for that, right? Things were getting a little weird there for about eight to ten years. As a man, you should know how to look nice, but I ask you this: Do you think Don Draper or President Obama spends any serious time thinking about their skin care regimen or complex pattern mixing? No. And neither should you. And for heaven's sake, leave the hair gel at home. 1998 called and said it doesn't even want it back, that you should just throw it out.

2. Ask an expert.
As a man, you may have a female friend who knows a lot about fashion or at least thinks she does. Be wary, though, of your lady friends. They have been watching runway shows, red carpet events, One Direction Videos, and potentially even old episodes of Queer Eye for the Straight Guy.  If you are not a runway model, movie star, boy band member, singer songwriter, or other public figure, you should acknowledge this to yourself and realize you have no need to wear the kinds of things these men do. As such, don't rely on celebrity style to guide your decisions. Instead, go to a menswear clothing store, at least in the beginning, and ask someone who really knows what they're talking about. Now, let me be clear, though. We're not talking about Express for Men, here. I'm talking about a real menswear store that sells clothes to men who are adults. Don't be buying those shiny sateen shirts with the fold over self placket. You need a separate placket at the very least. If you don't know of a good menswear boutique like this one, you can always start at Ralph Lauren.

3. Don't wear fashion hats.
It is no longer necessary for men to wear hats to complete their outfits. Since the average male isn't going to be wearing a hat wherever you are, you shouldn't wear one either. It makes you look like you got too excited about getting dressed and made too much effort. You're not Usher, and you're not Justin Timberlake, and you surely are not Frank Sinatra, so leave the hat at home. Better yet, leave the hat at the store, and don't buy it in the first place. It is unnecessary unless you're bald and freezing.

4. Keep it classic.
Now, this is not to say you can't follow the subtler trends, like, say, varying tie widths by a few fractions of an inch, or perhaps a check versus a subtle plaid in a sport coat. However, if you don't want to be considered a "fancy man," or perhaps worse, a total dork, try to think about what a stylish man from the fifties or sixties would have worn when it comes to things like shoes and suits. I know you may be tempted to get a pair of what you think are italian-looking long square-toed shoes, but I beg you, resist! Instead, opt for a loafer, a wingtip, a weejun, or even just a nice laceup cap toe with a little perforation. The shoe shape should really just mimic the basic shape of your foot. And no, I do not mean it should be longer where your big toe is. That's weird. Stop over thinking it.

5. Keep it simple.
Keeping your ensemble simple is the surest way to look masculine when dressing, especially when we're talking about casual combinations. Think about what you will need to wear in order to be physically comfortable while still looking neat and together. By this, I mean, if you think you will be chilly, wear a jacket. If you think you'll be warm, please try not to wear a tank top, but also be aware that you are allowed to wear weather-appropriate clothing. As mentioned in #3, keep all accessories and extraneous pieces to a minimum. Ideally, for a casual outing you should have a top, a bottom, a pair of shoes, a watch, and a wallet. These are the necessities. For a more formal occasion, a suit will suffice, and you should really think twice - or more than twice - before deciding you want to fancy it up with a vest or anything. Any extras you add are choices you made and thus statements of what you think looks good on you, so be careful.

I could say so much more on this subject, but I think keeping it simple is key unless you are, in fact, an expert like my uncle Stanley. If you're not, just try not to go overboard. It weirds people out.
Posted by Myrna Minx at 7:00 AM