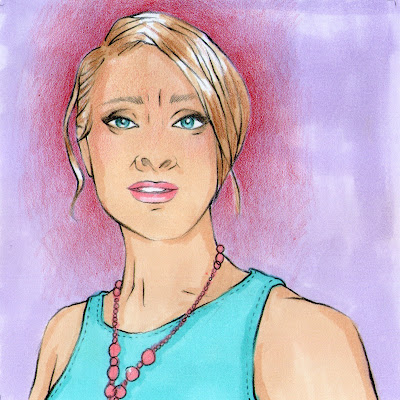 I'm writing this post on Friday afternoon from my bed wearing a cat tee shirt from TheMountain.com. Once While wearing this shirt, a woman stopped me on the street to tell me how much she loved cats. I didn't know what else to say but, "yes, so do I."

My head's been throbbing since Thursday afternoon, though it's not exactly painful, which explains why all the caffein in New York in addition to two Anacin didn't help. I have that strange sensation that my head might either explode or just float away, rendering any serious coherent thoughts an/or ideas fairly impossible. That should explain why this will be more like a journal entry than our regular blog post.

Thursday I left the office round 7pm after a frantic search for rose gold-colored faux leather swatches in all the clear plastic bins under my desk. Having found five cards that had acceptable textures and passable colors, I left the office in hopes my head would stop throbbing in the fresh air. I felt panicked.

On the train I finished the last two pages of American Psycho and realized that, yet again, I had read a book with an ending I found less than satisfactory. I wanted him to end up with Luis Carruthers since this was clearly the only ending that would make any sense. I closed the book and re-read the first two  pages and realized an old man wear G-Star Raw shorts was sort of giddily smiling to himself as he looked around the train. Considering the book I'd just finished, I was creeped out.

At the 47-50th street stop, a couple and their daughter got on the train sort of standing in front of where I was sitting. My head was still throbbing, but I noticed the girl was wearing a Yellow and White Striped Tee with a sequined Tommy Hilfiger logo that had been designed during my tenure at that company. Her shoes were glittery, too, and it was overwhelming.

The girl wouldn't stop moving around or talking or moving in such a way that all the lights reflecting off the sequins on her shirt would hit my eyes, so I had to close my eyes. But that didn't help, either, and I had to press on my forehead and temples.

Two blocks from my apartment I realized I could hear myself breathing, and it didn't sound good. It was sweltering, and I had a feeling I needed a sedative.

In my apartment, the air was thick and hot, and I had immediately to strip down to my underwear on the way to the air conditioner, where I stood until I was sure I wouldn't burst into flames. The next thing I knew, it was 12am. I sat up, frenzied and confused. Where was I? Why was I only wearing my underwear? I had fallen asleep on my sofa, and the TV was on.

Stumbling into my bedroom, I put on the cat shirt and crawled into bed, and the next thing I knew, I had awakened 30 minutes late for my run. And then I was 30 minutes late for work because I thought for sure a run would remedy this whole situation. It did, really, for a little while. But then, around 2pm today, when I was supposed to have been able to leave the office by 1pm, I realized my head had been throbbing again for the past hour.

I left the office and had a chocolate milkshake from an ice cream truck. That helped a little, and so did a stroll though Lord and Taylor. However, the fact that none of the people at the makeup counters offered to do my makeup did not help. So I went to Macy's. There, a girl at Benefit offered to "give me a touchup." Clearly, my answer was yes. And I was soothed for a little while.

But now, here I am again, head throbbing, wearing a cat tee shirt, and writing an all-too-long blog post about a non-headache headache. All I have to say is TGIF.