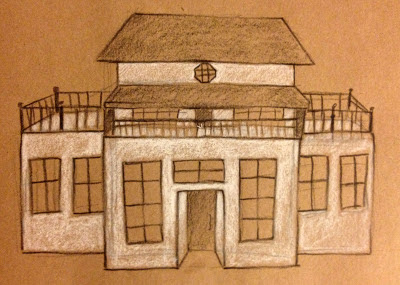 Since I've been running again, I've had a lot of time to both think and check out houses. So, at 5 AM yesterday morning, I started picking out things about the houses that I liked so I could put them all together and create a perfect Spinster Dream House. That is, of course, if they're still unwilling to sell me The Biltmore Estate.

The most important thing about the exterior is that it would have three balconies/terraces. The entire front of the house would have a covered balcony where a spinster could put her rocking chair and drink her tea when she wakes up early in the morning to enjoy the silence of the world before anyone is awake. On either side of the house would be open, uncovered terraces where a spinster could have either a nice dinner party under the stars or a nice day of sunning with her lady friends.

The interior would clearly include a giant bedroom on the second floor whose french doors would open onto the covered balcony. The Bathroom would have a giant shower and tub with water pressure that could comb your hair for you. That way, a spinster could really be sure she's clean before she puts on her bathrobe.

In the bedroom, there would be a walk in closet with a folding table in the center and plenty of shelves, hanging space, and extra wooden hangers. Also, a laundry chute in hopes that the closet wouldn't become a giant pile of discarded running shorts.

Also on the second floor would be the spinster's work studio or home office which would include a waist-high table and plenty of gift wrapping materials. The natural light in this room should be excellent, and this room should open via french doors onto one of the open terraces in case a spinster needed to paint or write or draw in the sunlight.

On the first floor would be the kitchen. Because a spinster may not be all that interested in cleaning, the kitchen would be built like Home Improvement's The Man's Kitchen for durability and easy hosing down.

Some necessities would include more than two full bathrooms, a guest room (for cats), plenty of power outlets, a gas stove, and of course, central heating and air. No spinster should be without central heating and air...but somehow I am.
Labels: architecture balcony dream house home and garden home improvement man's kitchen spinster studio terrace