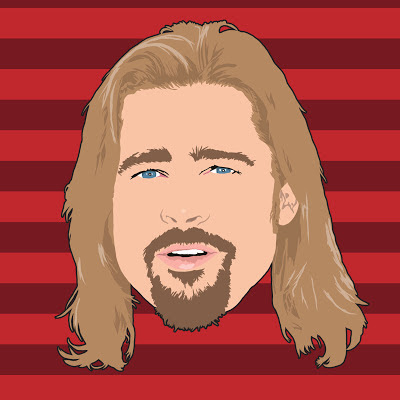 A few weeks ago, I shared a week's worth of dreams with you. While I've heard it said that no one cares about your dreams but you, I kind of like hearing about other people's especially weird dreams. Yesterday at work, for example, one of the CAD designers told me she had dreamed her friend had a baby and named it "Saggy." Gross! Lucky for her, though, (and you) I had quite the strange dream the night before, myself.

In my dream, I was in a restaurant, and I noticed Brad Pitt was there. Trying to be cool, I turned back around and continued with my dinner. About midway through, though, I had to go to the restroom, and when I walked in, there was a woman walking in just before me. She seemed a little giddy.

The woman went inside the stall, and I didn't really know what to do. I was expecting to have to leave and come back later, but while I contemplated, Brad Pitt strangled the woman to death, and she fell to the ground.

I panicked, but now Brad Pitt inexplicably was dressed and had a gun and was after me. Realizing I would never get away, I just turned to face him, and opened my arms for him to shoot me. He did shoot me, and I fell to the ground, but I only took a short nap. When I realized I was still awake, I made for the door. Just when Brad Pitt was about to shut the door on me and shoot me again, though, I woke up. Thank goodness that was a dream. That was almost more than a spinster could handle in one night.
Labels: American Psycho brad pitt dreams murder saggy spinster strange dreams work