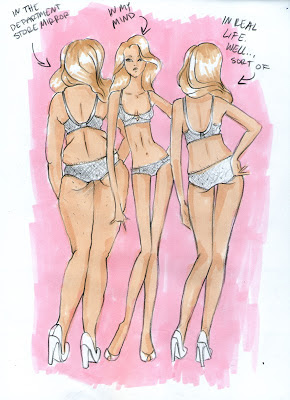 In the absence of mirrors, other people, and rational thought, I like to think that the makers of the Victoria's Secret catalog have been pasting photos of Adriana Lima's face onto my body. They've only done this, though, because they think my face is too all-american, and so of course I understand. Last night's adventures, though, revealed my thinking on this point to be a fallacy, and I, for one, am horrified.

As you all know, I've got a lot of weddings to attend before the end of 2013, and so tonight whilst picking up the shoes for a bridesmaid's dress I'll be wearing in October, I decided I should see if I could find any dresses I might wear as a guest at another, sooner wedding. Picking up the navy lace number I'd found online beforehand, I headed to the dressing room.

What I saw in the dressing room will, no doubt, give me nightmares for the rest of the week. My hips, while still inside my pants, looked like two fat pork chops. The chunk sitch. But then, oh then. I had to change into the dress. In the dressing room mirror before me, I saw a human-shaped sausage casing stuffed in some places with oatmeal, and in others with Cracker Barrel's Lumpy Mashed Potatoes. But what's that? My face is atop this monstrosity?

Most women like to say that it's the lighting in a fitting room that makes them look like a heinous beast. I hope they're right. The only strategy I can think of behind this terrible lighting is that any covering at all is better than what you'll see when you stare at yourself in your undies in a dressing room mirror. Maybe it's a selling plan? But then, how would they ever sell swimsuits?

That said, though, I am officially declaring a war, albeit cold, on the dressing room mirrors of the world. They're committing atrocities and crimes against humanity. It must be stopped.
Labels: Adriana Lima drawing fashion fat Illustration Lord and Taylor mirrors Shopping the chunk sitch underwear Victoria's Secret