A (Thurs)Day in the Life of a Spinster 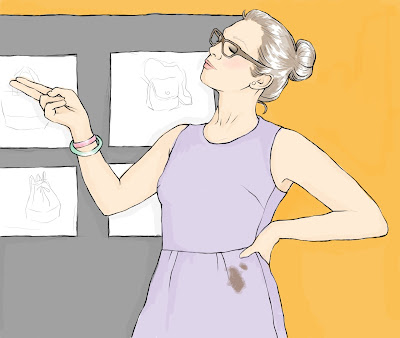 My latest subway read has been Colum McCann's Let the Great World Spin. In style, of course, it is much different from, say, American Psycho, in that there is a clarity of thought that, while often tangential, on the whole, is understandable and easy to follow. Though I'm not sure the stories within Let the Great World Spin would actually count as part of the "slice of life" category, they do describe in minute detail the sometimes mundane occurrences of some of the characters' lives. And, of course, now I'm going to have to copy its style and tell you about my day.

Yesterday I woke at 5:30 AM, since it was not a running day, and had a bowl of frosted mini wheats with a bit too much milk. In my quest for the perfect amount of moisture in my cereal, Frosted Mini Wheats always throws a kink in my plans. I never have just the right amount, always too much or too little. I checked the drawer for a plastic spoon so I wouldn't have to clean it later, but I found the box of spoons was empty. In the drawer below, though, there was a box of assorted plastic silverware, containing knives, forks, and at least two spoons. Crisis averted.

I climbed back into bed and watched Tuesday night's episode of Pretty Little Liars, posting to Glipho during a commercial break. Spencer and Emily had a fight, and Hannah got arrested. I know I'm too old to watch this show, but I love it anyway.

On the way to work, I fell asleep while reading Let The Great World Spin, which was inconvenient because I was in this middle seat of the M Train. There's nothing to lean your head against in that seat. The window's too far back.

I took the back way into the building and entered through the showroom. There were bras and swimsuits all lined up along the walls, pinned to boards with fabric swatches next to them. It was day four of a week full of meetings with our merchant partners from out of town. I had used the back entrance to avoid being bombarded with questions immediately.

I made a paper cup of tea and double layered the cups so I wouldn't burn my hand, and at ten it was time to go to the cross functional meeting via video conference. I dialed the video conference phone for the first time, and it worked.

I was supposed to have an important meeting that started at 11:30, but it was postponed, and I thought I had better get lunch. I ordered a salad with spinach, dried cranberries, feta cheese, and chicken. I told the man to put more balsamic vinegar than olive oil on it, but he didn't hear me say stop, and the salad was drenched. I got balsamic vinegar on my lavender silk dress, and I hadn't even made my presentation yet. Everyone had a tide pen, but the dress is dry clean only.

The salad was gross and soggy from all the vinegar, and so I put it in the fridge. I ate two cold frosted strawberry pop tarts from the vending machine instead.

The meeting finally happened around 1:30, and by that time the graphic designer had informed me that dolphins actually try to rape people. I googled it, and it was true. Now I couldn't stop thinking about it. It's terrifying. How can marine biologists, in their right mind, even let people near dolphins? And also, gross.

During the second meeting, no one paid attention to what I was saying, except all the people who had already heard it. The most important ones just talked amongst themselves and flipped through magazines. Tough room.

Next I had a meeting with the beauty team to discuss the bag they needed for summer. Also video conference. My production partner and I were the first two people in the room, and we talked via video conference to our out of town partner about Disney's Fantasia, of all things. I said I thought the mops had scared me when I was little.

I met back up with my cad designer by her desk, and we recapped a few main points we'll need to work on before I send out all the information to the factories. And then we walked to Wendy's to get milkshakes. Well, she got a frostee, and I got a frostee milkshake. This was our reward for making it through the meetings. On the way, we complained about how tense we felt every time our partners from out of town are in our office. It's double occupancy for an entire week.

When I got back, I met with my production partners who had some horrifyingly mis-matched strikeoffs I needed to approve, but we decided to make the factory try one more time. It looked as though they had tried to match the the paper CAD instead of the actual color standard.

Then I updated some folding information in a tech pack.

AT 6:15, I decided that, having finally made all my presentations for the day, I should go home. So I went home, ordered a pizza, and typed this while I waited for it to arrive. Once it gets here, I'm going to watch Netflix. And I'm going to love it.
Labels: American Psycho balsamic vinegar drawing fashion Illustration let the great world spin salad stain thursday work