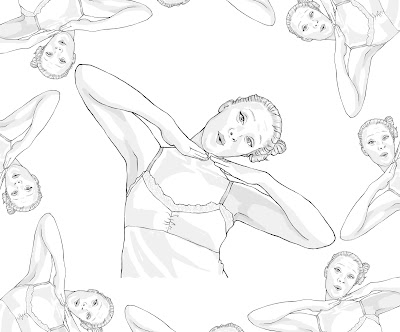 There is little in this world that makes this spinster happier than seeing some people sing and dance at the same time. If there are a lot of them, even better. Magnificent costumes? Even better! That is why I love some Busby Berkeley.

I can't remember the first time I saw a Busby Berkeley film sequence, but I think I was pretty young. I was young enough, at least, to think that such magnificent floor shows existed in real, modern life. I thought they must be things adults saw at nice clubs and dinner theaters. Well...not so much. I think probably the closest thing you'll find to a Busby Berkeley dance in today's performances would be something at Las Vegas or the very select Broadway Show. And that makes me sad. But, at least there's youtube!

In my most fantastical dreams of my spinsterhood, my life would play out like one of the below clips. Even though they're black and white, it's like you're watching a beautiful human kaleidoscope. But there's no way I'm going to explain this well enough to you. I just want to share with you one of the things I think is the coolest. Check out these clips and see what I'm talking about.


1. Busby Berkeley's Violin Sequence:
This one is super cool for the use of the lights on the violins. I have no idea what kind of technology Mr. Berkeley had available to him at the time, but this seems pretty darn high tech for a black and white movie.

2. Young and Healthy:
One of the reasons I like this clip is just because I love the song. The whole thing is great, but the real dancing starts u at around minute 2:30

3. Dames:
This one has a really long lead in, but again it's great. The women show up at around minute 3:00, then the action picks up at around 6:00, then things really get going at 7:20. However, I feel like this one is really one of the dances that really shows you what Berkeley is all about. It's really funny, though, to see all these women's faces in the beginning and see what was considered really attractive when they were making this movie. Some of them would still be considered beautiful, but some of them look sort of...well, drag queen-ish.

4. I Only Have Eyes for you:
To most people, this song will be quite familiar. However, I never knew it was in a Busby Berkeley film. There's a long (kind of boring/cheesey) lead in, but at minute 4:00, stuff starts getting crazy. I'm not going to lie. This one might creep you out a little. But then, isnt' that kind of what makes it cool?

5. Wonder Bar:
This clip incorporates yet another one of my childhood dreams: the masquerade ball. Little did I know that those rarely happen in real life, and when they do, half the people are wear gross "sexy" costumes. Boo. But, this one is fantastic. I love the use of the mirrors.

Well, I hope you've enjoyed your trip into old hollywood. I know I enjoyed the research for this one. Oh, Busby. Please come back and make some more movies in color. They would be so fantastic I can't even describe it.

Yep. This might be yet another reason I'm a spinster. But can you deny these are amazing?