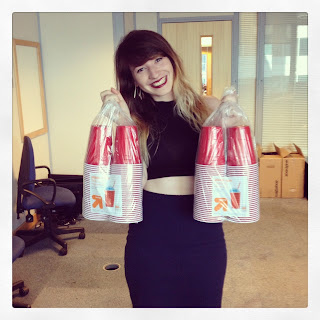 I'm not going to lie to you. I'm still recovering from my trip to London. So, today, while I'm still in recovery, I'm going to share some of the photos and videos from my trip. Hopefully tomorrow I'll share a bit more text details.

I think we should start this post with one of my best photos. When Maria Nichol, social media magician and excellent blogger at Glipho, found out I was coming to meet the Glipho team, she suggested we have a trade. She'd bring me some things from London, and I'd bring her some things from the states. Among my loot from the states were some Peanut Butter Snickers, Peanut Butter M&Ms, fun socks (not because they're american, just because I like them), some striped straws, and some Biscoff Spread (again, just because I like it.)  But the best part was something Maria, herself, requested. What was it? Red solo cups. Apparently, the ubiquitous Solo cup doesn't exist in the UK, and the fact Americans have red cups in all their photos, movies, and music videos, is quite exotic. With a little giggle, I was, of course, happy to bring two large packs. I feel like I got off easy there. And also...I'm considering becoming a solo cup trafficker.

The video you'll find here is one from my first dya in London. My friend Jenine was a real trouper and took me all around the city to places suggested by on of the english designers in my office at home. One of the places we went was Camden Market, a sort of much nicer version of Canal street or that little alcove market in NoHo in New York. However, when I saw this light up tee, of course I had to take a photo. Later, though, my friend Sam left a comment on my instagram saying he actually owned one of these tees. I'm late to the party once again. But still...fascinating. 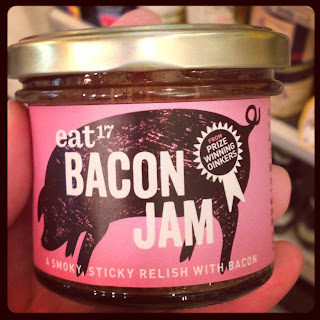 Like all americans, one of the places I liked the best in London was Harrod's.  I still can't fathom that they had a giant food hall at the bottom of a luxury department store. There was a room for sandwiches and breads and other things you could buy and eat immediately, a room for jams and jellies and other packaged foods (where I found this Bacon Jam), an entire fish market with counters where people could actually sit and eat, and a room with chocolate and other sweets. When I saw "room," though, I don't think that manages to capture the grand scale on which the food halls were laid out. It was big. Really big.

Aside from the food hall, there were other departments such as Clothing, furs, fine jewelry, costume jewelry, Lingerie (where I struggled not to drool on the 1930's movie star-esque, floor length and trimmed in ostrich feathers), electronics, stationary, furniture, home goods, china, crystal, toys, and something called a "millionaire gallery." I am still in awe. I can't even begin to describe. But, Because I can't, I'm going to share the videos I took in this fabulous place.


Images of the fish market in Harrod's

Only a small portion of the chocolate in harrod's

The most fabulous dollhouse I've ever seen (Harrod's) 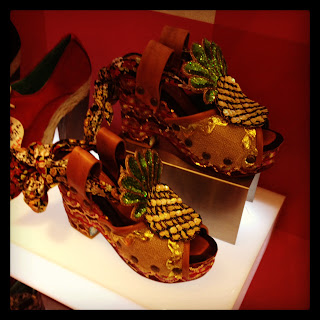 After I visited Harrod's on Friday, I made my way over to Oxford circus for a bit of shopping. I hit Liberty London, the Terry DeHavilland store, Joy, and sundry other excellent spots. I also saw a man eating a hamburger, bread and all, with a knife and fork. It was a real Seinfeld moment, but I didn't say anything. One of the coolest places I saw, though, was this crazy shoe store called Irregular Choice. According to their website, they have a shop in New York, but I'd never seen it. These pineapple shoes are one of my favorite items of clothing I saw in London, though I didn't buy them. I kind of wish I had. 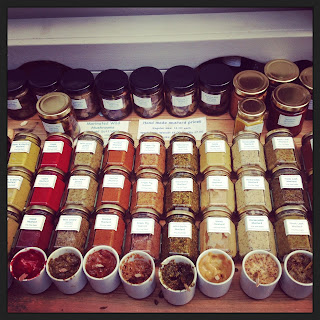 Saturday, Jenine took me to this excellent outdoor food market called Borough Market, where I ate a Ham and Pea Pie. It was delicious. I also bought some loose leaf tea and felt quite english. However, I still need to buy an infuser so I can actually drink the tea without eating the leaves. I mean, I'm pretty sure that's the way you're supposed to do it. They had all sorts of things and samples to try. A few of my favorites were a delicious Mushroom Pate, Vanilla Strawberry truffles, Fig cake, some kind of cheese I can't remember,
and the photo you'll see here: gourmet mustards. My favorites were the fruity mustards. Delicious.

On my last day in London, Jenine took me to the Victoria and Albert Museum, where I absolutely drooled over everything. Don't worry, I didn't get anything wet. However, we did take a little break before we went into the museum, where Jenine let me be an american and eat some scones and clotted cream with raspberry jam. And, of course, a pot of tea. The cafe in the V&A where we sat was so beautiful, I just had to take the below video.

More to morrow on the rest of the trip! I hope you enjoyed my massive obsession with instagram and its photo and video capabilities!