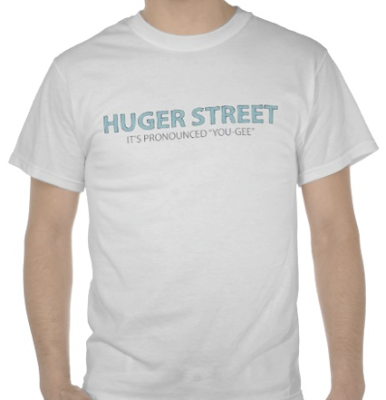 So yesterday we talked about Gervais Street. Today we have two more of the chronically mispronounced streets in South Carolina. The first name "Huger," is understandably often mistaken or a way to say something is more huge than something else. However, that's not a real thing. I've heard Huger Street pronounced as "Hoo-Ger," or "Huge-ee," or, of course, "Huge-er." However, the correct pronunciation is "You-Gee."

Now, of course, you may be thinking, "Where will I wear this shirt?" Well, like yesterday, I'll tell you. Appropriate places and occasions for the Huger Street tee include but are not limited to:
- Around anyone who thinks "huger" is a word other than the name of a street.
- Around Columbia when you know you'll be seeing someone who habitually mispronounces Huger Street.
- Outside of Columbia, any time you'd like to attract a conversation about Columbia or Charleston, for that matter. (My mother has informed me that this street also exists in Charleston.)
- To the gym, when you want to remember that "huger" isn't a word, but if it were, you wouldn't want to be it.

Check out the Huger Street Tee and other ridiculousness at the Zazzle Spinster Store! 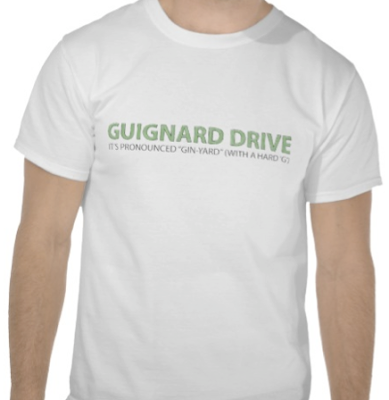 Next, we have the Guignard shirt. I have heard all sorts of pronunciations of this one from "gwig-nard," to "Gillard," to just flat "you know that street that starts with a G..." The pronunciation for this one was actually a little harder to spell out as the 'G' in Guignard is a hard 'G' as in the word "gore." So, I just went ahead and included that part.

Now, as far as where you should wear the Guignard Shirt, I say anywhere in the world. Sumterites get around. I have visited them in South Korea, I apparently was in London at the same time as the spinster Anna Owens. I've also run into Sumterites randomly on the street, and I've he
ard tell of people from Sumter getting on the same elevator in Hong Kong...or was it Shanghai? In any case, this shirt will help you meet fellow Sumter Folk wherever you go!