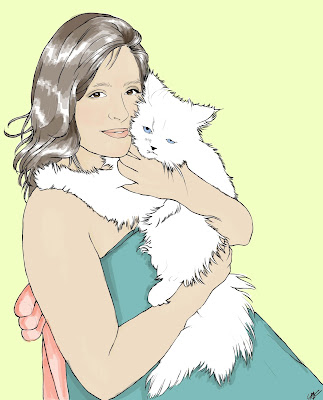 Surprise! It's another surprise portrait, and this time it's of my neighbor, Hannah and her beautiful cat Rosie! Hannah rescued Rosey, and she's just the sweetest, fluffiest thing ever. She's also oddly as light as a feather.

I took the photo for this portrait the day Hannah and I hung out in her apartment making the Earworms Playlist. Then we ate tacos, and it was a magical day.

To reinforce some of the things I said about Sumter people yesterday, here's a story about Hannah and me:

Hannah's apartment was empty for a little over a month after I moved in. It was the winter we had that huge blizzard in New York, and my cab got stuck twice on the way home from the airport after Christmas. The day after I got back to Astoria, clad in my heinous glitter velour track pants, snow boots, a sweatshirt, and my coat, I ran to the drug store to get...whatever it was that I needed. When I returned, I saw Hannah was moving in.

Hannah and I live above our supers, a World War II vet and his wife. I popped my head into Hannah's apartment to say hello, and the super asked where I'd been. "Oh, Carolina?" he asked (a lot of people up here think "the Carolinas" are somehow linked by more than just a name.)"Hannah's from Carolina," he said.

Of course, my next question was whether it was North or South. Hannah said she wasn't really from there but that her parents lived in wait for it...SUMTER. So...small world.