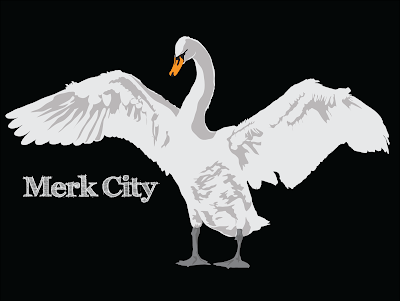 It was not until I lived in New York that I discovered my home town was referred to as "Merk City." I knew my high school had security guards, namely a jacked guy named Ike, and a day care center for children of students, but I was wholly unaware of the merk. Heck, I didn't even know what "merk" meant. Well, Urban Dictionary has set me straight.

According to wikipedia, the well-respected faux encyclopedia that it is (note my sarcasm), Sumter, SC was once in the top five cities in the US with the most per capita violent crimes. So, I suppose that should explain how it might be called "Merk City."

Now that the title "Merk City" has been explained, I'm sure you're wondering "why the swan?" Well, that one's easy. One of Sumter, SC's claims to fame, other than it's high rate of violent crimes, is Swan Lake and Iris Garden, home to a pair of every kind of swans in the world. It's pretty cool. So, of course it's only natural that today's tee shirt would be the Merk City tee, complete with a menacing swan, because as anyone from Sumter can tell you, those swans will bite you. Clearly, then, it is entirely appropriate that those vicious swans live in merk City.