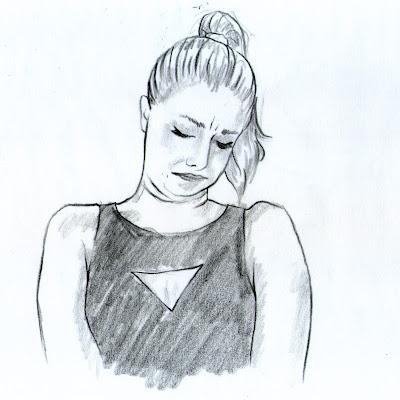 Well, I'm back from the wedding, and you'll be happy to know I'm still a spinster. We didn't make it a twofer. However, I did have a good time. I could report a lot of things about how beautiful all the festivities were, but as this is a spinster's blog, lets talk about how I spinstered out hard core the whole time.

Friday night was the rehearsal dinner, and as an honorary bridesmaid, I had the pleasure of eating all of the food without really having to do any work. I mean, take note ladies, this is how it's done.

I wore a dress I'd bought on a recent shopping trip to Betty Paige with fellow single lady, Chelsea Purcella. It was black, sleeveless, and there was a triangular cutout where my cleavage would have been if I had any. However, once I got to the party, I found myself becoming more and more self conscious about my non-cleave as I noticed many of the male guests averting their eyes. Fellow bridesmaid and single lady, Katie, though, reassured me by noting that we were, after all, the single ladies in attendance. Did anyone expect any less?

At dinner, I inhaled a large pile of beef tenderloin with the help of a silver service that included a knife that was delightfully and surprisingly sharp enough. You don't often find that in sterling flatware. I was so pleased I could have used it on many more piles of beef if they had only given me the chance. However, I suppose if I had done that, I wouldn't be feeling so well afterward.

Across the table from me was one of the cutest guys to don a sport coat and a pair of horn rimmed spectacles in my presence in a long time. But he, too, was averting his gaze. I was tempted to stuff my napkin into the triangle on my dress and pretending it was a low-flying cravat. Why didn't I bring a dickie in my purse? Curses.

I noticed the spectacle wearer was very, very right handed, thwarting my quest to discover his marital status. Finally, though, I caught him cutting his meat. Married! Thank goodness. Now I didn't need to make myself look like a woman-shaped tissue box with that napkin hanging from my dress's cutout. Later I discovered he was not only married, but he was also a minister. Sigh. I'm fairly sure being a minister's wife was not my calling anyway. And neither was polygamy.
Labels: beef Betty Paige cutout dress eating food rehearsal dinner single ladies spinster spinstering wedding season