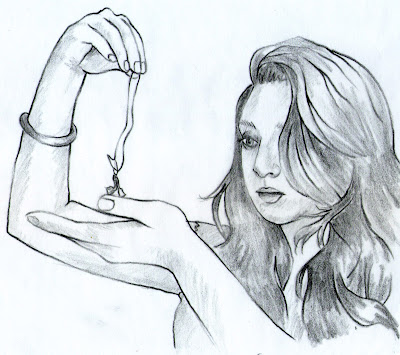 As honorary bridesmaids, my sister, Katie, Mary Cothonneau, and I were invited to the bridesmaid's luncheon on the morning of the wedding. The luncheon was hosted in the beautiful home of a family friend, replete with fresh floral arrangements of white hydrangeas and white roses. Mimosas, sparkling grape juice, and spicy cheese wafers were served as hours d'euvrs while everyone arrived, and the place was awash with every bright shade of pink, orange, salmon, and coral you can imagine. Most of the colors were encompassed in printed dresses by Lilly Pulitzer. I wore navy and black, and I thought, "was that wrong?"

The other honorary bridesmaids and I were seated at a square table in the entrance hall just off the dining room, covered with  a white faggotted tablecloth and set with antique china and silver goblets. Aside from my sister, we were all spinsters, and we had the best time discussing cats, babysitting, my sister's attempts at having me kidnapped as a child, and the time Mary Cothonneau's mother changed all her locks because my dad wore a gorilla costume to her Halloween party.

The lunch menu included the following: plain yogurt with fruit and granola, a tomato cut and stuffed with shrimp salad and topped with a basil leaf, asparagus wrapped in thinly sliced ham wrapped in filo, and heart shaped biscuits served by one of the hostesses from a served platter. Of course I drank sweet tea from my silver goblet. Mary Cothonneau befittingly received a broken heart biscuit, to which she just said "#spinster."

When everyone had finished their lunch, we all gathered around the bridesmaids' table In the dining room for something they called a "cake pull." Encircling a tiered blue and white cake at the center of the table were several small, square, pearlized envelopes with either "Miss" or "Mrs" written in curly script on their fronts. Each guest was to pull an envelope with the title that applied to her. I pulled a "Miss" envelope from the table, and dangling from a length of blush-colored ribbon attached to the envelope was a small silver charm. Upon closer inspection, I discovered that the charm was two tiny wedding bells. The fortune inside of my envelope read, "let the wedding bells sweetly sound." The only thing I could think was "I'd have to meet a single straight man who believes in marriage first."

Mary Cothonneau pulled a cupid and commented that she was in a marriageless love while I was in a loveless marriage. Katie got a fabulously tall high heel charm whose fortune read "a journey of a thousand miles begins with a single step."

While we ruminated on our fortunes and were silently pleased no one had accidentally given one of the spinsters the baby carriage charm, the tiered cake was cut and served. And all thinking ceased because it was time for dessert, the spinster's forte. Well, that and all other meals.
Labels: black and white. bridesmaid's luncheon Brunch cake pull charms cheese wafers drawing food fortunes Illustration katie mayes lunch mary cothonneau spinster wedding season