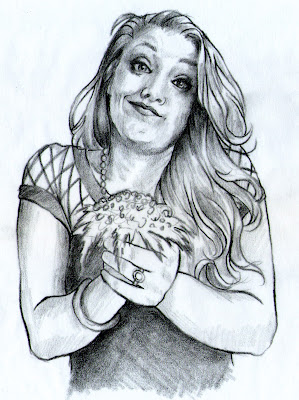 As honorary bridesmaids, Katie, Mary Cothonneau, Rachel, and I were charged with handing out the programs. This gave us the benefit of seeing all the guests as they entered and, in turn, being seen by them. Mary Cothonneau and I were on the groom's side's entrance, and I didn't see any bachelors over the age of 18 enter the sanctuary.

Mary Cothonneau did keep me entertained, however, admitting she hadn't brushed her teeth since before the luncheon. Neither had I. In fact, so consumed was I with pretending to gobble up my sister's baby, I had all together neglected to wash my hair that day and had instead opted to douse my head with baby powder and hoped I didn't look like a barrister handing out paperwork instead of programs.

When we ran out of programs, the other honorary bridesmaids and I were summoned to the bride's entrance from the narthex to the sanctuary. We were to be escorted to the second pew of the bride's side for our honored seating. My sister walked down the aisle, led by her usher. Then Katie walked, and the minister from the rehearsal dinner escorted Mary Cothonneau. And then...and then there were no ushers left. The wedding director was in a panic. She was calling around for "another man. We need a man!" Boy, do we. At the last minute, she nudged me from the back and said, "just go." While I made my way toward the front of the sanctuary, I thought, "how appropriate," and I walked down that aisle like the lone wolf (or kitten, really) I am.

At the reception I of course made a B-line for the lemonade and then straight to some crab cakes, then a mini barbecue sandwich, and heaven knows what else. The Sunset Country Cub was all but overflowing with victuals, gigantic flower arrangements, and men wearing wedding rings. While all three were certainly wonderful, the first was the only one I could really do anything about. So, I did my best to ensure the hosts were aware they had chosen an excellent menu. It is important to note, though, that I had some help from a man who spent his entire night standing next to a table housing an ice sculpture and two large arrangements of shrimp cocktail. Though he tried his best, dipping and eating, dipping and eating, I could not see where he was actually depleting the supply of shrimp.

When the cake was cut and the bride and groom had left, Rachel and I caught a golf cart back to our car, exhausted. The next morning, my dad told me that when he'd seen me walking down the aisle by myself, he just thought to himself, "well, I guess she just wanted to sit down front." #Spinster.