A Serious Problem for the Spinster 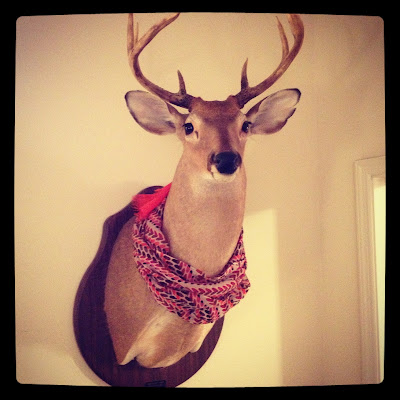 So, the presence of my mom this week has been magnificent. Because she has been here, my apartment is 100% more set up and put together than it would have been had she not come. She even helped me hang some pictures and Hastings last night. I don't know when I would have gotten around to putting Hastings on the wall if she hadn't helped. He likes to get ornery sometimes, and I can't deal with him alone.

Yesterday, while I was at work, my mom bought me a chest to hold my TV. We brought it upstairs with the help of a kindly neighbor, and we put it in place. It's so nice because the wii doesn't have to be right next to the TV anymore, with all its wires overtaking the the chest like kudzu.

We tucked into a delicious dinner Mom had made, ready to watch some vintage Law and Order on Netflix. The only problem was that now the wii wasn't outputting images to the screen. We could hear the wii menu, but we couldn't see it. You can imagine how horrifying this is for a spinster. I need the Netflix. 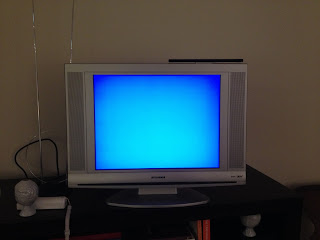 For the two hours that followed, I became obsessed. I googled the problem. I called the person who gave me the wii. I tried plugging the wii into my tiny bedroom tv. The weird thing was, it worked find in my bedroom. But should I be hoarding all the Netflix to myself by using it in my bedroom? Clearly not. I mean, the fact that I'm usually the only one watching it is entirely beside the point.

Now, if you're looking at the photo here, I'm sure you're thinking that this TV is clearly an artifact from early 2008. Your thinking would be correct. However, just the night before we were able to watch a nice episode of Law and Order with no problem.

I suppose it's a good thing that I'm like your grandmother and have an antenna (visible to the left of the TV in the photo above). This way, at least we can watch the Today show without fear of the ominous blue screen.
Labels: furniture hastings Law and Order mom Moving netflix technology the today show wii