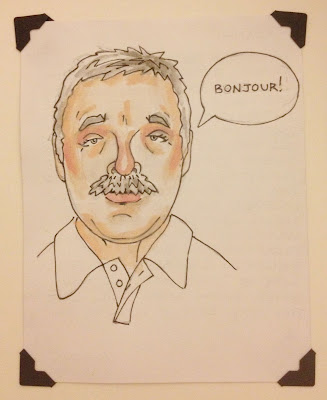 Perhaps it was a little self-absorbed, but for my going away party last night, I had my friends all draw or write a little something in a spiral-bound hard cover sketch book I'd bought for that very occasion. The results made me really appreciate how awesome my friends are. They're funny, smart, sweet, and creative, and I thought I'd share a couple of the entries with you this morning.

The first image you'll see here is from my friend Randy. It'd been at least a couple of years since I'd seen Randy, so when he turned up at the going away party, I was really excited. Randy and I sat next to each other in Steven Stipelman's fashion art class our last semester at FIT, and so on the front of the card Randy brought, he included an illustration of Stipelman. The likeness is really uncanny, and the note on the back is so nice. I love that Randy's card has a drawing on it since that's how we know each other.

The other entry I wanted to share today is from my friend Jono, and I actually laughed out loud when I got home and looked at the book. Jono is yet another friend I met through Kelly, the thrower of excellent picnics. I'm not really sure when I met Jono, but every girl I've known since then has been in love with him. Maybe that's a little bit of an exaggeration, but not much. He's a total mensch. 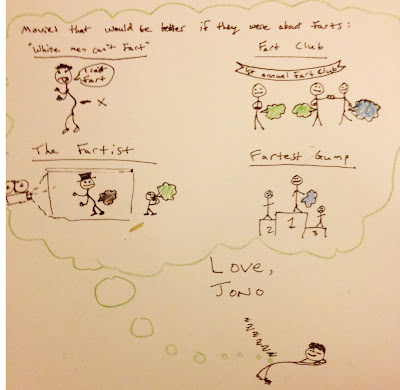 The entry Jono made is entitled "Movies that would be better if they were about farts." I meannn....clearly, it is amazing. In case you have a hard time reading the titles, he's named them White Men Can't Fart, Fart Club, The Fartist, and Fartest Gump. I meannnn...I'm laughing out loud right now even as I'm typing this. Because...well, because it's just so silly. And the illustrations are really funny, too.

All of the entries were amazing, but I thought these two might have the most mass appeal visually. I don't care what any of you say. My friends are the best, coolest, smartest, funniest, and the best looking. Don't try to dispute it.

Also: there was a photobooth at The Standard Biergarten, where the party was, and we definitely tried to fit six people in it. You can just see a little bit of my forehead in those four photos, and it was so much fun. However, when we split up, the photos did turn out much better.

Thanks to all my New York friends for being the best!
Labels: drawing farts FIT friends going away Illustration Jono Kelly Moving NYC portrait sketchbook steven stipelman the standard