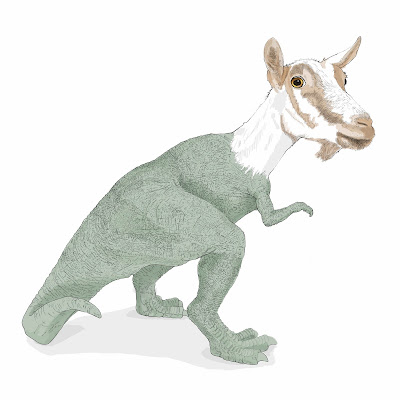 This week's Illustration Friday topic is "Creature." As such, of course I had to draw the ol' goatee rex. It's a tyrannosaurus rex with the head of a goat.

Of course this isn't really a real animal, but it was inspired by two things: 1. My recent trips to Walmart and Atlanta area flea markets, where I saw some pretty awesome plastic dinosaurs, and 2. My brother's imitation of a goat eating the food at the petting zoo last time I was home. So, clearly, there needed to be a mashup.

And also, did you know that goats have rectangular pupils? That really kind of freaks me out.

And another word on goats: I was talking to my dad the last time I was home, and he told me that in Pinewood, SC, there was a man who had goats in his yard. My grandfather apparently thought this man was absolutely genius and described his lifestyle as "perpetual motion." The brilliance of the whole setup was this: The goats ate the grass in the front yard, and when the man threw out his trash, the goats ate that, too. Then, the goats had little baby goats (kids), and the man sold the offspring and made money. So, the goats were doing absolutely nothing but benefitting their owner. I wonder if he also drank their milk and made goat cheese.

So, there you have it. The goatee rex. Happy Monday!
Labels: creature dinosaur drawing goat Illustration illustration friday Photoshop t-rex