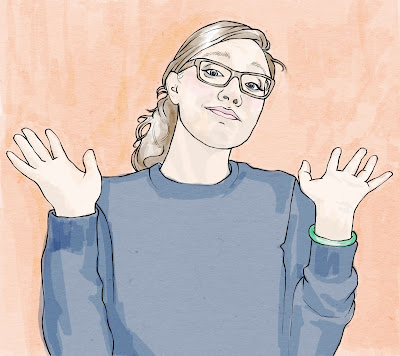 This past weekend, one of my favorite spinsters actually got married, turning in her spinsterhood membership. I travelled home on Thursday evening for the bachelorette party which, because my sister and I were hosting, was clearly a tame affair. We ate a dinner so garlic-y and delicious we were safe from Vampires all night. My friend Virginia, I hear, was also safe from her new husband who nearly made her sleep on the couch with that breath.

Dinner was followed by a Meredith-themed scavenger hunt and then lots of chocolate desserts and a lingerie shower. I'm proud to say my gift made Meredith laugh so hard she cried. And it wasn't even raunchy.

The next day was rehearsal day, and it started out with brunch and mani-pedis. My sister's manicurist was a girl named Jaja who was by all accounts thicker than a snickers. She wore a shirt that was half solid and half fishnet with galaxy printed leggings. While I thoroughly enjoyed my manicure and pedicure, the best part was when Jaja told me she thought I was twenty years old and that my sister was my mother. I meannnn....I just had to share that.

I learned my lesson from Virginia's rehearsal dinner and wore a more modest ensemble to Meredith's rehearsal. And, what's this!? I was matched with a Ken Doll of a Silver Fox, and he wasn't wearing a wedding ring! Things were looking up! We stood there, and I instagrammed (re: spinstergrammed) everything until the moment we were to join and walk back down the aisle. At this point, I discovered that my silver fox was, in fact, one of those married men who doesn't wear a wedding ring. Furthermore, he was married to the groom's sister. Fail.

The rehearsal dinner was at a log cabin venue called Cain's Mill where I remember my dad had his fortieth birthday party. That night, I had worn my pajamas under my regular clothes, and I was both sleepy and too warm. But, that's not what we're talking about today.

In the center of the first room was a spread of barbecue and sides. There were rolls, cole slaw, baked macaroni, hash and rice, and a giant pile of pulled pork. I knew I would eat it all, but thankfully for everyone else, I ended up near the back of the line. Some other people got some food, too.

I sat next to the two groomsmen who were actually single at dinner, but they weren't all that chatty. They're really into cycling, and I'm really into...Netflix. One of them did, however, impart that his tuxedo was actually sized for a child. His beard, though, was not child-sized, but rather long enough for a proper Tolkein dwarf.

I had two desserts, which I'm guessing you won't find surprising. At first I had a brownie, but when I realized they had a pig pickin' cake, I had to have some of that pineapple-y deliciousness.

Before the cake, though, I got the best treat of the night. One of Mere's friends from Law School is married to author Wiley Cash, whose book I read last year. My mom had already met him and said he was absolutely delightful and easy to talk to, so of course I subjected him to some of my own mindless prattle. He was, as my mom described, completely friendly and willing to discuss his upcoming book tour and all other sorts of things. The only thing was that I told him I had stalked him when what I really meant was that I had read his author information page...he seemed unfazed, though. So, at least there's that.

Having gotten my full dose of celebrity and married men for the night, my sister and I retired to our home to eat a few more milk duds that had been left over from the lingerie shower. The next day would be full of more treats for my chunk sitch and more men with wedding rings.