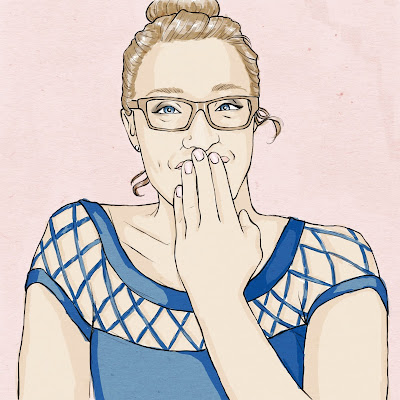 The bridesmaid's luncheon was held at my childhood home, and the only dress that would fit over my chunk sitch was a little dressier than perhaps it should have been. So, to dress it down a little, I just threw my hair up in a wet bun. Ok, so maybe the wet hair had more to do with laziness and running out of time, but I think it aided in toning down an ensemble that could've otherwise made others feel uncomfortable.

Ginger Jones brought her silver biscuit holder, and Cindy James brought some amazing quiches. Ginger Jones had cut all the grapes in perfect halves, lengthwise. Somehow that felt infinitely fancier than just regular grapes. The menu was as follows: coffee cake, yogurt with fruit and granola, quiche, asparagus, and miniature round biscuits. A mixture of Cranberry and orange juices was served out of sterling silver cups from a sterling tray as all the guests arrived, and everyone congregated in the living room.

To get everything started, Ginger Jones had had a bunch of photos enlarged and printed on foam core board. Each bridesmaid had submitted a photo of herself and Meredith that had some sort of significant meaning to her. As a means of further explaining Meredith in her real splendor, each bridesmaid stood up and explained to the rest of the guests (which included several members of the groom's family) why she loved Meredith and what the photo stood for. I'm pretty sure she'll have mine framed in a gilt frame. And yes, I did make that joke at the luncheon as well.

The bridesmaids were seated at the dining room table, and the course of conversation had much to do with how long everyone had been dating before they got engaged. When all the food had been consumed - I, for one, had eaten at least three of those mini biscuits - it was time for some gifts! Meredith had had button down shirts monogrammed with each of her bridesmaids' initials. They were the perfect thing to wear while we readied ourselves for the wedding later that day.

My mom's cats, Kate and Coco, love the dining room chairs, and when we all rose to leave, everyone looked as if they had a severe body hair problem on our hind quarters only. I had a welcome little giggle at all the non-spinsters' expense.
Labels: biscuits bridesmaid's luncheon Brunch Cindy James dress Ginger Jones Meredith silver