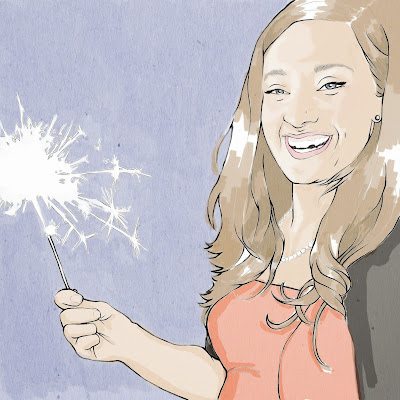 At 1pm, all the bridesmaids reported to the parlor of First Baptist Church of Sumter, SC. In our matching shirts and makeupless faces, we all ate from the cheese plate Meredith's Mom had brought as if we hadn't just left the luncheon. Meredith had had the brilliant idea of having a makeup artist for all of us, and while I waited for my turn, I saw each bridesmaid transformed one by one.

When it was my turn, I realized I had gone to high school with the makeup artist, and she was quite improved. This boded well for my face. As it turned out, this girl was a total magician. She even applied false eyelashes, and I must say, I quite liked them. I even got a little hair makeover as well, which I had not expected but was entirely welcome.

When we were all primped and ready, it was time to get dressed and take some pictures. Because of an earlier incident with a bandeau that was, perhaps, a bit too old, I decided to stow the black straps to my brazier inside the bodice of my dress. I looked awkward, but my hair covered most of it.

The shoes I'd purchased certainly were not Birkenstocks, nor did they feel like anything of the sort. And, in addition, my years of walking in New York have left me with gnarled feet and an inability to walk properly in heels. So, when it came time for me to walk down the aisle, I sort of...stalked down its center in a wobbly fashion.

Meredith looked absolutely beautiful walking down the aisle, and for a brief moment, I forgot the throbbing bunion on my left foot. That's right, I'm an old lady with a bunion. And I was the only single bridesmaid.

The wedding ceremony was performed by a Presbyterian minister in the Southern Baptist church in which I grew up. As such, I was a little surprised when he started giving a sort of sermon to the bride and groom as the stood before him at the top of the marble steps. I thought for sure it would be brief, but as the speech continued and the minister drove his points home one, two, and three times, my feet began to tell me I was wrong. I started shifting back and forth from foot to foot while I plotted the minister's demise, and just when I was about to settle on a method, he announced the married couple.

The Silver Fox led me down the aisle while I leaned heavily on his arm, planning an impromptu amputation of my feet as soon as I was out of sight. Instead, I rushed to my car and slipped on my backup shoes and my bra straps and a pashmina to cover up the bra straps, and I teetered over to the O'Donnell house to be announced as part of the wedding party.

The reception was excellent, with spring rolls and things wrapped in bacon, and mushrooms stuffed with meat, and a photo booth! I love when weddings have photo booths, especially when they print extra copies. And, thanks to Courtney the makeup artist, my face looked great in all of those copies we got.

The evening ended with sparklers and the bride and groom driving off into the night. My sparkler burned down, and I headed home to get very barefoot. All I can do now is wait to hear about how my lingerie shower gift went over.