Driving Back to Atlanta 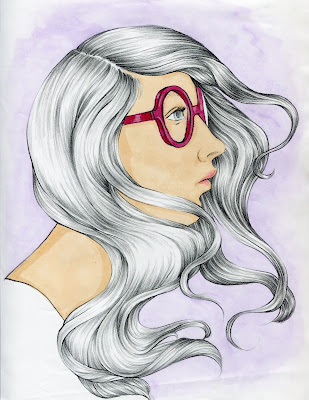 Today I'm driving back to Atlanta to slip into my clean sheets like a chunky piece of paper into a soft envelope. It's been a delightful Holiday season thus far, but I need to back to work on Monday. That being said, this is just a drawing post.

I started this drawing before I left ATlanta for Christmas, and I finished it the day after christmas. Sometimes the act of drawing an doctoring hair is just a meditative exercise. That was what this was about. I just wanted to draw some hair.

The supplies I used were Graphics 360 9"x12" paper, black prismacolor pencil, and chartpak markers. The background I did with a light lavender marker with a blender marker before and after.

I bought myself a new scanner hoping it'd fit my oddly sized paper, but it's about 1/8" too small bot vertically and horizontally, so I'm afraid I'm going to have to send it back. I scanned this on th enew scanner, though. Because it's too small, I got the shading you'll see around the edges and at the corners. Sadness. I hate having to deal with sending something back.

More tomorrow as we gear up for spinstering in the new year!
Labels: atlanta chartpak drawing driving hair Illustration prismacolor