Gift Guide: For the Night Runner 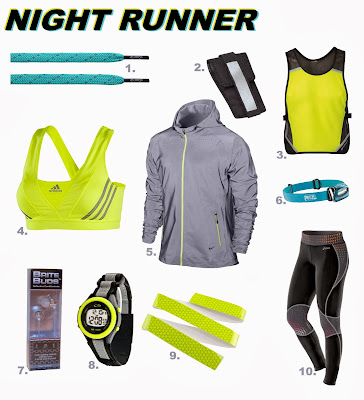 I must admit that today's gift guide is inspired almost entirely by my searching for a way to run at night or early in the morning without fear of being hit by a car. However, if I'm looking for stuff like this, I'm sure some other people are, too. Some of these items are for women, and some are for men, and some are unisex. However, most of the items that aren't unisex are also offered for the other gender in the store's website. So, here we go!

1. Teal Reflective Laces: Laced Up, $5
I don't know about you, but I think shoelaces are a nice stocking stuffer. These have some reflective pic stitching, which makes them perfect for night running!

2. Nathan Shoe Pocket: Dick's Sporting Goods, $7.99
This has a double function. It's a perfect place to keep your keys, credit card, or a little bit of cash. The second function? You guessed it. It's reflective!

3. Nightlife Reflectives Vest II: Brooks Running, $20
This is a great item for year-round night or early-morning running. You can just slip it over whatever else you're wearing. It's a classic.

4. Supernova Racer Bra: Adidas, $40
It's not really reflective, but it is neon, and it's pretty cool with the criss-cross in the back. Probably not a good gift for the men on your list.

5. Nike Allover Flash: Nike, $500
Ok, so maybe this is a little expensive for anyone on your gift list. But how cool is it? This jacket is made of completely reflective fabric. There's no way you're getting hit by a car in this thing. Here's hoping it goes on sale.

7. Brite Buds - Reflective Cord Stereo Earbuds: Amazon, $23.29
You're listening to music anyway. Why not have an extra element of safety while you're cruising down the street?

8. Reflective Nylon Fastwrap Watch: Target, $19.99
If you're one of those runners like I am who sometimes can't wait for it to end, this might be a good gift for you. Stay safe and track your time with this reflective-band watch.

9. Nathan 3m Reflective Tape: REI, $10.00
The day I bought my running shoes, I had just gotten caught in the freezing rain. As such, I bought the only shoes Paragon  Sports had that had a little gore tex in them. But they're black. I'm considering adding a bit of this tape so I don't feel quite so stealthy in the dark.

10. Women's Lite-Show Tight: Asics, $65.00
I think tights are the warmest for running, and I alwas buy black. However, these are really nice ones because they have a lot of reflective detailing. They also come in a men's version.