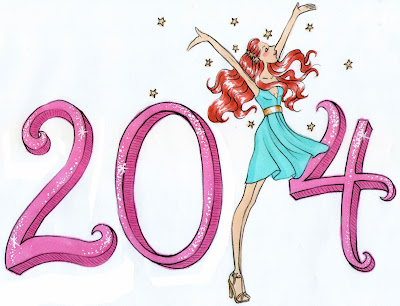 Well, ladies and a few gents, the new year is upon us. I never really make a new year's resolution, but I do feel the dawn of 2014 should be recognized in some manner.

As an avid fan of The Today Show, I am quite familiar with their 'year in review' sorts of stories. The fashion blogs I read (aka: whose pictures I view) always do a year-end wrap up of trends we should leave behind in the new year. So, today I'd like to call out a few things I'd like to see left in 2013, and a few ways I think we could all replace them in hopes we can become the best, most spinsterly versions of ourselves in 2014. Below, you'll find my top five things to leave in 2013 followed by the five things with which they should be replaced.

1. Leave Behind:  Political opinions on Facebook
I thought everyone agreed that it was bad manners to discuss politics or religion. Unfortunately, most people I know who use Facebook seem to have forgotten this rule. With friends who are affiliated with all sides of every issue, I just wish everyone would think before they type: How will you feel when you read the opposing view in your newsfeed? Do you want someone to feel that way about you?

Replace with: More photos of your pets
Whether you're a dog, cat, bunny, hamster, or donkey person, I would much rather see precious photos of your pets and also some laughing babies for good measure than any bile-spewing. Thank you.

2. Leave Behind: Body Con.
Now, I know lots of people have fabulous bodies, and that's all fine and good. We've already reviewed that at least my uncle has weighed in on how un-fabulous my body is, but that is not the issue. From Miley to Kim, I am tired of seeing the tightness. Over it. Let's get some more creative silhouettes, shall we?

Replace with: A bathrobe and some sweatpants
If you haven't already adopted this mode of dress in 2013, it would really do you well to hop on the band wagon in 2014. It's really the best way to spinster.

3. Leave Behind: Cable
Ok, so yes. Breaking Bad was worth the high, high price of cable. DVR is amazing. However, it's just so expensive, and Breaking Bad has ended. Also, Downton Abbey is on PBS, and that's free.

Replace With: Netflix and/or Hulu Plus
We all know I'm a huge fan of Netflix, and it's almost one tenth the price of what cable/internet was in New York. No one's saying you should give up internet. That's just laughable. However, cable is just too expensive, and there is plenty of TV and there are plenty of movies to be watched on both Netflix and Hulu Plus. If you had both, you could be paying less than $20 a month. Better, right?

4. Leave Behind: Hooker Heels
Really, these should have been left behind years ago, but I still see them out and about. The ones that kill me the most are the ones with the fat platform on the bottom and the sky-high spindly heel. Those can't be comfortable. Also, they look a little out of date.

Replace With: Fun Sneakers
Kate Spade had a really fun collaboration with Keds this past season which spawned a bunch of cute  printed and glittery sneakers, and I loved them all. Additionally, we've still got the wedge sneakers, though some might say these are on the way out. For my part, however, I still love them.

5. Leave Behind: Workout Boards on Pinterest
Oh, man. The workout  boards are killing me on Pinterest. I have, in my time, pinned a workout idea or two, but the photos of those girls are the worst. I am no longer 25, and neither is my body. And the photos are making me sad.

Replace With: Private Boards and More Photos of Cute Baby Animals
Those workout boards can be made private so I don't have to cry about them all the time. Instead, let's have more cute baby animals and laughing babies. Videos of laughing babies are really the best.