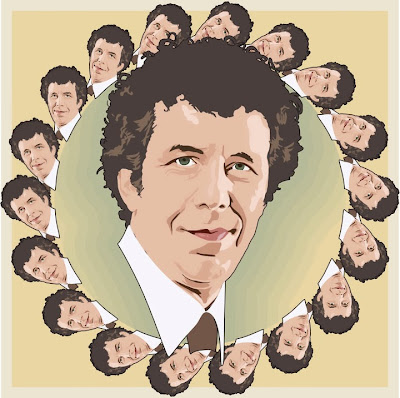 As we've discussed many a time, I love some Law and Order. I recently finished the regular Law and Order and have moved on to Law and Order: Criminal Intent, and I'm already up to season 9. Now, if you're planning on watching all these episodes and care anything for the character story lines, I'm going to have to stop you right now. Spoiler Alert!

When I lived in New York, there were a few celebrities I'd see from time to time, and they were really random ones. I saw Russell Brand riding a bicycle down sixth avenue three times, and he was every bit as skinny as he looks on TV...maybe even skinnier. I saw Mario Batali quite a few times dining at the restaurant below my apartment on sixth avenue (Da Silvano, for those who might be on the lookout), and he was not as skinny as Russell Brand. The best celebrity I saw more than once, though, was Eric Bogosian. This of you who watch Law and Order: Criminal Intent may know him as Captain Ross. I saw him at the basketball court by Da Silvano once, and then right before I left New York, I saw him at the Pret by Radio City Music Hall. I think he caught me staring, but I was just so excited.

Now, back to Law and Order. There I was, watching Netflix, and all of a sudden, Captain Ross was KILLED! I mean, what the what? How am I supposed to go on after the only cast member of Law and Order I know exists in real life is offed on the show? Not only this, but an episode or so later, Goren is also kicked off the show! Everyone who loves Law and Order: Criminal Intent the best says Goren is their favorite character. They like how smart he is. And Captain Ross, well, he's a real person!

You guys, I just can't. I don't know if I can go on. But of course I will. Of course I'll continue watching Law and Order until I've seen every episode of every franchise - even Trial By Jury if I can find it! (For Heaven't sake Lillith from Frasier is on it. How can I resist!?)

Anyway, I know this post did nothing to help you through your morning or your day, but I just had to share. I am appalled, I say! Appalled! I call for more Eric Bogosian and Vincent D'Onofrio stat! Jeff Goldblum is cute and all, but I can't really say for sure if he's a real person. After all, he was an alien in Earth Girls Are Easy. I rest my case.
Labels: Celebrities Earth Girls Are Easy eric bogosian Frasier graphic Illustration illustrator Jeff Goldblum Law and Order Law and Order: Criminal Intent Mario Batali Russell Brand Vincent D'Onofrio