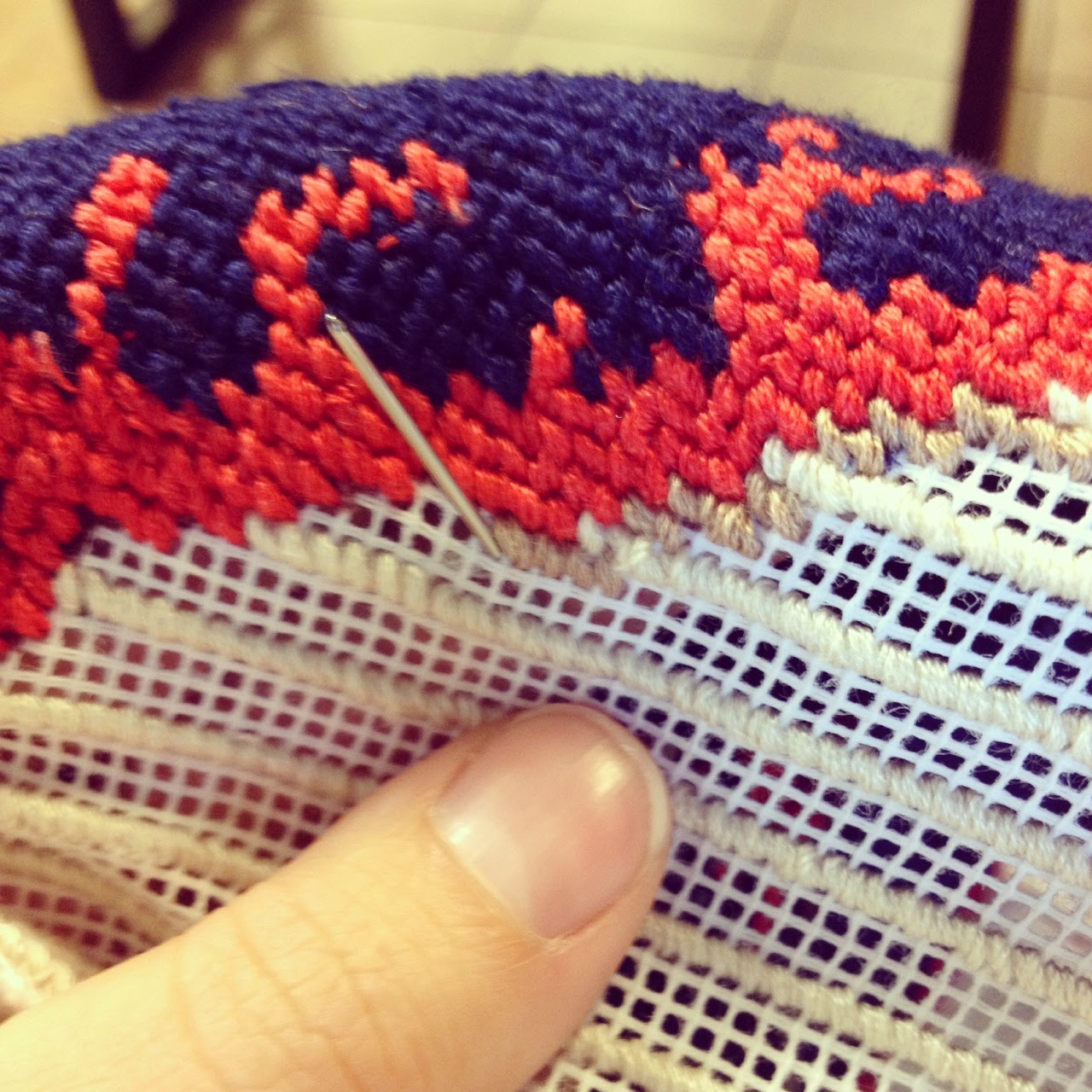 Yesterday I found myself at the car repair waiting for my speakers to be replaced so that I could listen to NPR in crystal clarity. I knew it wouldn't be that quick, so I planned ahead. I brought my needlepoint project. As any good stitcher can tell you, pushing and pulling a needle through a needlepoint canvas is a good time to contemplate. And since I got some really good thinking in during the two and a half or three hours I sat in the waiting room, I thought I'd share.

1. Needlepoint takes forever.
I've been working on the same 16" x 16" needlepoint pillow for over a month now. In fact, it's closer to two months at this point. It's not even a complicated design. I work on it every night, and somehow I never seem to see any progress. Still, it is relaxing, and it allows me to come up with the ridiculous thoughts I often share with you.

2. Men, when given the chance, will watch HGTV with the best of them.
The last time I was in the Ford dealership waiting room, they were playing a football game, and I promptly fell asleep. That's not an exaggeration. I actually fell asleep. Today, however, there were a couple of back yard renovation shows as well as a couple episodes of Rehab Addict, and I don't think I'm overstating it when I say the men were paying closer attention than I was. I know they were a captive audience, but I felt like this could be useful information...somehow.

3. People can't count.
In this waiting room, the furniture options were as follows: two chairs, two three-cushion sofas, one two-cushion love seat, and one bench. When I arrived, the chairs were occupied, and the three-cushion sofas had on person each. The love seat was empty, so I sat there and started in on my spinsterly work. About ten minutes later, a large man wearing a photo real printed tee shirt and a bluetooth earpiece walked in the door and promptly sat next to me. H continued to wonder for the remainder of my time there why he had chosen to sit next to me to take his nap when he could have had so much more space elsewhere. The world may never know.

4. Infinite Jest continues to take over my life.
While I was reading Infinite Jest and indeed immediately after I had read its last page, I was perturbed to say the least. As time progresses, though, putting more and more time between us, the ol' brick of a book seems to relate to an increasing amount of things in my life. Don't get me wrong. I'm not actually suggesting you subject yourself to the frustration that is Infinite Jest, but there are so many unexpected truths. This example doesn't happen to be a truth, in particular, but whenever the boys at the tennis academy are trying to buy drugs, they always call and ask the dealer if he will "commit a crime." The crime, of course, is distributing narcotics, but I often want to call friends and coworkers and request that they commit some other crime. I'll leave that explanation to your imagination.

5. People still download crazy ringtones.
I never have my ringtone on. In fact, I'm not even sure what my phone sounds like doing anything other than buzzing against a hard surface. Today when I was sitting in the waiting room, though, a man standing at the auto parts counter received a phone call. I'd say he was about 40 or so. That's why, when I heard the theme song to Disney's Phineas and Ferb blaring from his cargo short pockets, I had to suppress a little giggle. I can't even blame him, though. That show is good. And just in case you don't know what I'm talking about, I've conveniently included a video of the opening sequence of Phineas and Ferb. I'm sure your interest will be piqued.