Two weekends ago, my mom texted me that the Country Living Fair would be in Stone Mountain Park, here in Atlanta this weekend. I love a good fair, so I couldn't resist. My mom couldn't make it, but thankfully my friend Sara was up for an adventure!

The Country Living fair is put on by Country Living Magazine, and in Sara's words, it looks like every southern woman's Pinterest and Etsy came to life. There were booths of crafts and wares, a giant pile of pumpkins and gourds, food vendors, and - my favorite part - remodeled camping trailers.

Sara and I couldn't have gone on a nicer day. The weather was sunny and just the slightest bit warm for the Uniqlo sweatshirt I chose to wear. We started with a few of the remodeled trailers, and I have to say, I was more than impressed. The first one had both indoor and outdoor kitchens, though I think it was nearly factory fresh. The next, however, was a ladylike vintage pink-and-periwinkle mini camper, part of which you'll see pictured here below. I thought my friend Chelsea would have loved it. There were even more excellent renovated campers, but somehow I didn't take photos. I would love to go to an entire show of them, though.


After marveling at the excellent renovation jobs, Sara and I headed to check out some of the booths. There was a lot of jewelry made of assembled vintage findings, but one of our favorite booths of jewelry was one called Rag Trader Vintage, which featured lots of necklaces, hairpins, rings, and sundry other pieces of jewelry. Among our favorites were a rectangular double watch necklace, a cat cameo, and tiny music box necklaces. (I couldn't find any of theirs online, but here's a link to some similar ones. ) Below you'll find a photo of some of the watch necklaces.


One of the only purchases I actually made at the Country Living Fair was too delicious not to purchase. There was a table called Pam's Pantry, and there were all these little jars with lucite tops, and when I went closer, I realized they all had little dips in them. I tried a few, and they were all pretty delicious, but the last one I tried was one called "Hog Heaven," and I had to purchase it. And so I did. I purchased a mix, and if we happen to got o the same party any time soon, then you may just get to taste it.

Now that I've revealed that I'm still very much a little piglet, let's just look at some more pictures and try to forget how sick I was earlier this week.

Above is an arrangement of my favorite earrings at the Country Living Fair. The bottom right ones are my favorite because they look like they have little bananas, but as you can see, they were quite pricey, so alas, I did not purchase them. But how fun are they? 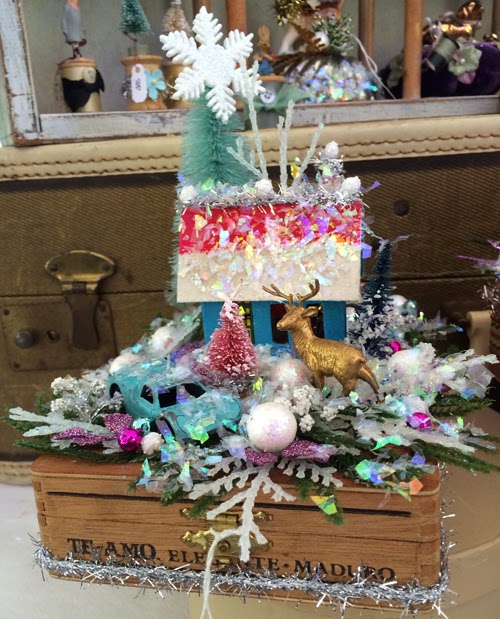 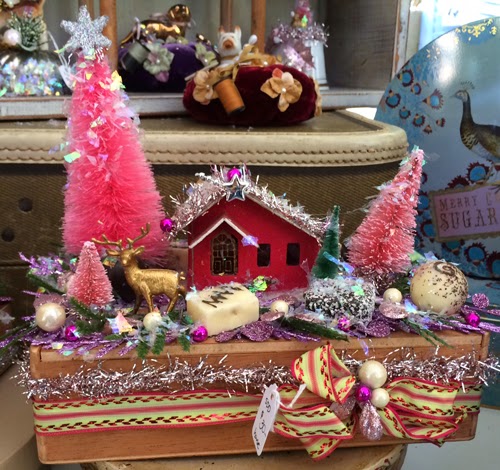 Next you'll see two miniature christmas scenes that had been affixed to the tops of cigar boxes. For some reason, I thought these were so charming. I'm not sure if I'd feel safe actually opening the cigar box with all those things on top, but it's a really cool idea. They also had ones that were on top of cookie tins. Imagine bringing your Christmas cookies to a party in a tin or box like that! 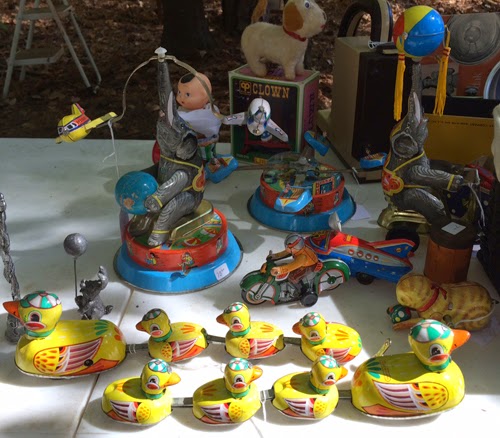 Above are much less festive photos, but I thought there was just something really cool about these vintage metal toys. And finally, I'll leave you with a closeup of the best metal one. The elephant balancing a ball on his nose.

The Country Living fair was a lot of fun, and I'm very proud I didn't eat more than I did. Happy Sunday!