Halloween Spinstering: This has very little to do with Halloween 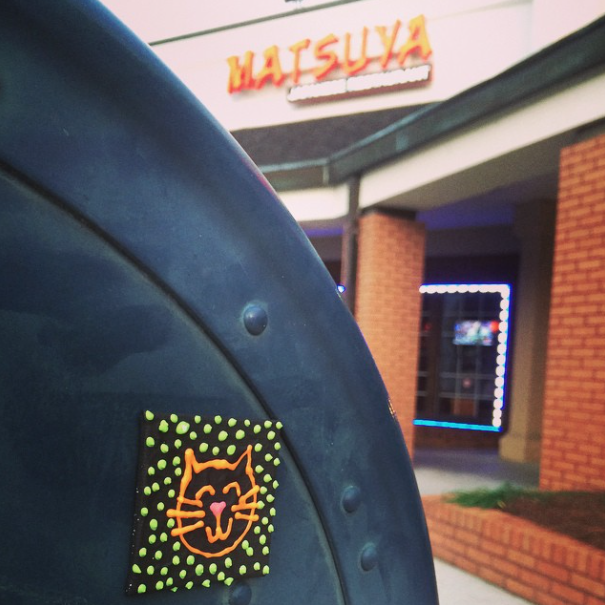 As you know, yesterday was Halloween. I got home a little earlier than usual, and before I knew it, I had been asleep for two hours, and there was a melted piece of chocolate under me. How did this happen? I couldn't possibly say, and that's what scares me. Chocolate or no, though, there's little in this world I find to be a better use of time than a nap that creeps up on you.

Once I awoke, I decided it was time for some dinner. I've been meaning to get Udon ever since I moved to Atlanta, but somehow it hasn't happened yet. I looked up Japanese restaurants that had Udon, and one of the higher-rated ones (four out of five stars on Yelp) was one called Sushi Matsuya in Toco Hills. When I got there, though, somehow I did not order Udon, instead opting for chicken teriyaki. I have to say, though, that the restaurant did not disappoint, especially since it was in a strip mall. You know, ambiance and all.

Outside of the restaurant, I posted one of my #FAFATL magnets, and it was claimed almost immediately!

Back at home, I watched a movie and did needlepoint like the champion spinster I am. It was delightful.

Now, since today's post was merely an account of how I did not actually celebrate Halloween other than sleeping on some candy, I figured I owed you a little something else. So, here's a list of links of you while you eat your breakfast of Halloween candy. Ain't no shame, child. This is exactly what the day after Halloween (and Christmas, for that matter) is for.

1. The cutest/funniest costume I saw at Trunk or Treat was this hilarious great white shark costume that had both legs and a tail.

2. Pin this article for next year if you have little kids. Baby Willow's parents have lots of great ideas.

3. If your breakfast candy isn't quite enough this morning, and/or you feel like making a real effort, this Strawberry Lemon Poppyseed Pancakes recipe looks incredible.

4. There's only one of this Cat Pocket Blouse left, but how cute is it!? It's not in my size, so if you're an extra small, please buy it and wear it. They also have a totally see through dress version (get a cute slip, maybe?) and it's only in a size two.

5. And in case you missed Taylor Swift and Ellen Degeneres doing "Kitty Corner," I think any self-respecting cat lady should watch it.