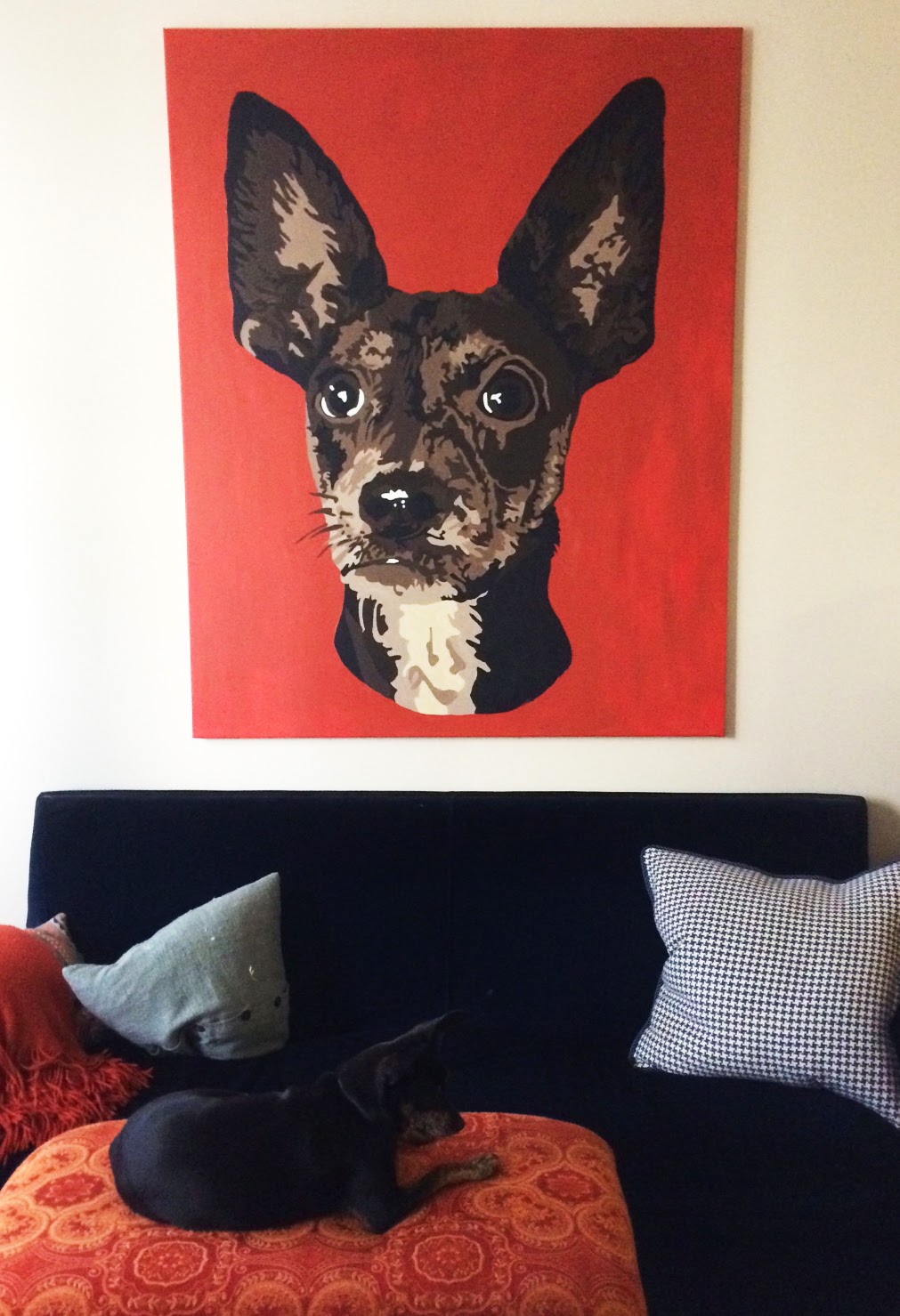 Last night I had what I like to call an "interesting people party." When I lived in New York, my friend Kelly used to throw parties where, essentially, I met almost all of the interesting people and friends I had there. I'm not sure about everyone else, but I definitely had fun, and I got to debut my new painting (see above). So, the theme of today's post is some things that happened in relation to my preparations for this party. Let's just bullet point them.

- I made a painting with that giant canvas I bought at Binders.
There are a few things I should say about this. The first is that I didn't even think twice about what would be going on this 60" x 48" canvas. I knew for sure it would be a giant portrait of miranda.  I used to paint a lot of portraits when I was in college, and I've considered starting to do it again many times. I've had a lot of requests since I started showing work-in-progress (WIP) photos of this in Instagram. Unfortunately, though, I'm afraid a portrait this size would price itself out of the market. I got a great deal on this canvas, but if I hadn't, it would have been $175 (ish) without any paint on it at all. When you add up just the hours (somewhere north of 12) that went into the painting, well...and that's not to mention supplies. Sigh.
However, smaller paintings are always up for negotiation.

- When I woke up yesterday morning, I knew I needed to add a few more things to the menu. So, I went into my Pinterest Recipes board, and I found this recipe for Mini Deep Dish Pizzas. When I had finished the jar of pizza sauce, I thought I could stand to have some more little pizzas, so I switched to pesto as the base sauce, and I really liked that. I'm going to venture that both kinds were a hit.

- Lee's Tokyo Sauce
One of my favorite restaurants here in Atlanta, Seven Lamps, has an appetizer called Cottage Fries. I decided to add that to the menu for last night. At Seven Lamps, they serve the fries with mayo, and it's excellent. However, I decided to be a little bit like Bareburger and serve them with a few different dipping options. Unlike Bareburger, though, I didn't make them myself. One of the sauces was one I ran across int he international aisle at Publix the other day. It's called Lee's Tokyo Sauce, and it just might be my new favorite condiment. Go get some ASAP.

- Walmart Shopper
I had to get my car serviced yesterday morning, and while I was in the area, I just decided to do my party grocery shopping at Walmart. I know, I know. In theory, I should hate Walmart. The truth, though, is that I just don't. I find it wildly convenient. While it's not as snazzy as Target, I am not mad at it.
While I was inside the behemoth that is the country's largest retailer, I had to peruse more than just the grocery section. That is how I found myself in the pajama/loungewear section. Well, that and the fact that I'm a spinster and want to wear all loungewear all the time. Ladies, I just have to tell you that Walmart has stepped up their pajama game (yes, I did that on purpose) this season. White Stag has those long sleep tees that pretend to be sleep dresses but have sleeves so the straps don't slip off in the middle of the night. I bought one. Stop being jealous. They're under $9, so you can just go get one of you own. Faded Glory also had some cute printed sleep shorts (some of the prints are much cuter than others), and I Appel had this cute matching set. In short, you need some Walmart pajamas.

I hope you all enjoy your Sunday! If you do nothing else, consider buying new pajamas.
Labels: art loungewear miranda painting pajamas walmart