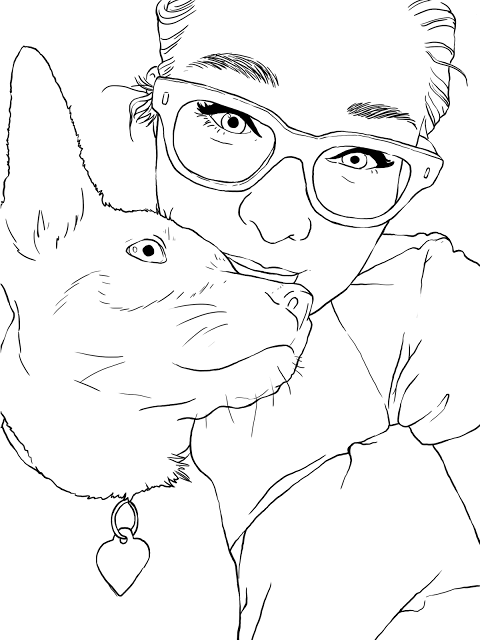 Up until the time I got Miranda, I considered myself a cat person. However, it was suggested to me that a dog might better suit my purposes. Dogs actually want to hang out with you all the time.

I found Miranda on Pet Finder, and when I called the Oconee Regional Humane Society to see if she was still available, they told me to fill out an application. After filling out the application, I was planning to go meet Miranda one weekend while she was sitting outside a Pet Supplies Plus. I called again to ensure she was still available. I told the woman from the Humane Society that I just wanted to meet Miranda and see if we got along. She told me to be ready to take her home because she was so sweet.

The first time I held Miranda, I knew I'd be taking her home. She was (and is), indeed, so sweet. She'd been fostered by a family who, when they let her go to be adopted that day, thought they should perhaps have kept her. I'm so glad they didn't. Miranda's pretty much the best thing I've got going.

Traditionally, I've thought of Spinsters as people who have cats. However, now that I've had Miranda for over six months, I have to say I think she's the best. So, today I'm going to lay out the benefits my little puppy has brought into my spinsterly existence in hopes that perhaps another spinster will find her new best friend, too.

- Exercise:
Even when I'm being lazy and watching lots and lots of Netflix, I absolutely have to take Miranda out for her walks. While I've still got the chunk sitch happening, this at least promotes some circulation in my legs.

- Knowing my neighbors:
It's often said that people in New York don't know their neighbors. I did happen to know my last neighbor in New York, but over all, I think keeping to yourself in a neighbor situation can be a good idea. You don't want to have to move furniture all the time or lend out all your sugar. However, Miranda is such a friendly little dog, I can't help but meet my neighbors now. The best neighbors I've met while walking Miranda are ones I'd never have spoken to otherwise: the kids. Kids love Miranda, and Miranda loves kids.

- Mornings:
Knowing I have to walk a little puppy every morning is a pretty good reason to get out of bed. I can't just let her sit there and wait forever. When I do let her out of her crate for her walk, her excitement is contagious. It's a positive way to start my morning.

- Shopping:
Miranda loves to pull apart stuffed animals, so I find myself purchasing new ones fairly frequently. Her enthusiasm for a new toy, though, is so fun to watch that shopping for them is pretty fun.

- Talking to Strangers:
Generally, I don't just talk to random people, but since I've had Miranda, I've begun to think that perhaps I should. When you have a little dog by your side, she opens up conversation as a possibility with just about anyone. The interaction is always really positive, especially when they find out she's a sweet little rescue dog.

- Dog People:
Before I had a dog, I was pretty annoyed when someone's dog jumped on me. As such, when I first got Miranda, I assumed only a select group of people would welcome interaction with her. However, since I've had this sweet baby dog, I've discovered that an overwhelming majority of people welcome contact with her. I don't know if they're just being nice or if most people actually like dogs. Whatever it is, it makes me happy.

There are a lot more things I could say about this sweet baby, but right now I want to pet her. Happy Sunday! Aren't you glad tomorrow's a holiday?