Spinstergram: My Dog May Be A Cat 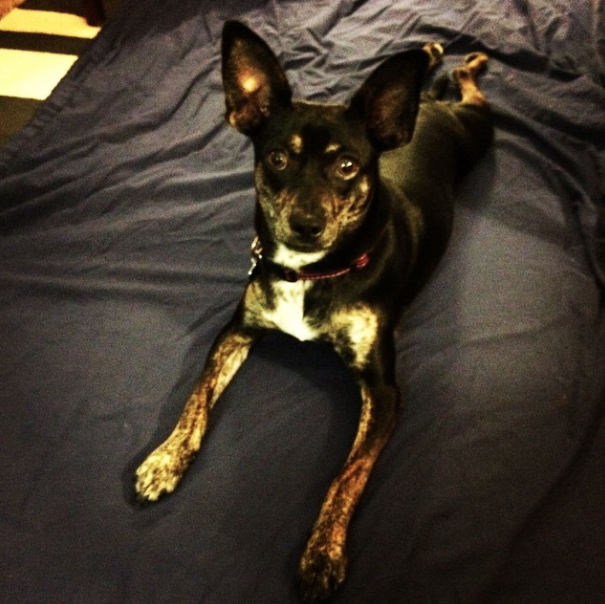 Yesterday I took advantage of the day off and started work on a project I've been wanting to do for some time. However, Miranda had other ideas. Before yesterday, I thought only cats sat in the middle of your newspaper, computer, wrapping paper, or anything else you're doing. However, Miranda has proved me wrong. This is a picture of her blatantly sitting on my fabric and just looking at me.

When I paint Miranda begs for attention in the cutest ways. She'll sit very closely behind me so that she's touching as much of me as possible. If that doesn't garner some attention, she moves to the next level: standing on her hind legs with her front paws on my shoulder, looking at whatever I'm doing. While it's distracting, it's pretty adorable. I'm not even going to lie.

So I guess I did sort of get a cat...at least in the sense that she sits on my projects. Spinsterhood: intact.

Now, something else: This weekend I saw Pitch Perfect 2. It was cute even if it did promote lots of racial, ethnic, and gender stereotypes (sometimes tongue-in-cheek and sometimes...not?). However, the best part was that Flula Borg was one of the leaders of the German team.

Who is Flula Borg, you ask? Well, I didn't know, either until a few months ago. That was when my friend Meredith sent me a video of a German man wondering about the american phrase "party pooper." And it was hilarious. So, I'm going to embed it below. Enjoy!