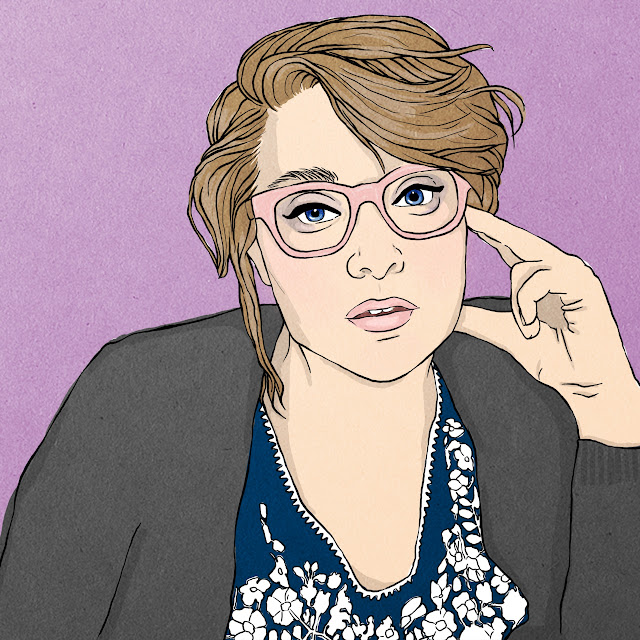 Well, spinsters, I promised you a non-photoshop post today, and here you have it! Just like the old days, we have an illustration! And why? Because I have my computer back. But in case you're wondering what happened....

Last Thursday I was watching a YouTube video, and all of a sudden, my computer just froze. I tried to force quit Safari, but nothing would work. So, I just pressed the power button and left it alone for a moment. When I turned it back on, there was a blinking file icon there with a question mark and nothing else. I called Apple support, and after we tried all the different options, they made me a genius bar appointment.

The Mac genius bar at Lenox Mall is insanity. I don't know if people are just showrooming in there or what, but it's always jam-packed with people on a level I never saw in any of the Manhattan Mac stores.

After waiting hunchbacked on a stool, a guy with a soul patch to match his soulful eyes and unnecessary droopy knit hat came and tried a bunch of other things. Then, we had to check my computer in because there was nothing he could do right away, and I went home.

There's another portion here where I try to update my MacBook from 2008, and it doesn't really go that well, but we'll just skip that part.

I got a call on Tuesday that my computer was ready, so I made plans to pick it up after work.

In the meantime, I got a text from Chase, and someone had stolen my credit card information. All I can do is laugh when I think of how they caught the person. They tried to spend $200 at Pinkberry. What could you possibly even buy for $200 at Pinkberry? Well, in my estimation it could have been about 40 small yogurts with toppings or 40 brownie a la modes or maybe 20 take home yogurts.

I went to the mall to claim my mac, hoping they'd been able to fix it. They'd fixed it, all right. They replaced the hard drive and the logic board. But you know what? I'd never opened the box to my external hard drive to back it up. So...yep. I've got nothing left.

I heard there was an episode of Sex and the City about this, but at this point, I have too much of a sinking feeling to actually watch it.

So, my MacBook Pro and I are reunited, and it only feels sort of OK. I'm trying to look on the bright side. This means I'll be forced to actually get Adobe Creative Cloud. Heretofore I was working with CS3. I know, I know. Hilarious.

Ok, well, if you've actually made it this far in this post, then good on you! If not, then you're not reading this.

Have an excellent saturday! I'll be trying to figure out Creative Cloud.