#spinstergram: When Your Brain Isn't Working 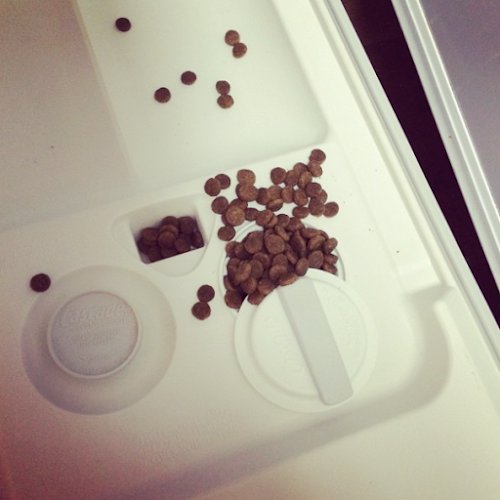 In my spinsterhood, I periodically go through bouts of what I suppose could best be described as "wakeful sleeping." It's not that I can't sleep at all. It's more that I wake up multiple times a night or just once and can't go back to sleep for an hour or two. While this can be extremely productive, by the end of the day, I'm not quite sure which way is up. The above photo is evidence of such a state.

Last week, I had loaded the dishwasher and was going to start it before I went to bed. I went about my business, and before I closed it, I went to add the soap. I got the normal amount, and I poured it into the little pockets. However, as I poured it in, It didn't fit there as it usually does. I stood there thinking, "Well, that's strange. It always fits in there perfectly...."

After a minute or so of staring down at the dishwasher and it's oddly shaped "soap," I realized that I had gotten on autopilot and filled the soap dispensers with the "normal amount" of dog food. This is my brain on wakeful sleeping.

I texted my sister to tell her what I had done, and she thought it was hilarious. She said that her husband had fixed himself a plate of dinner one night, and when he went to sit down,  he couldn't find it. He looked everywhere for the food and was just at a loss as to what he might have done with it. Finally, he opened the cabinet that housed the dishes to get another plate, and there, sitting atop all the clean plates, was his dinner.

While discussing this with a coworker, she told me she had poured orange juice in her kids' cereal one morning. Another coworker told me she'd found her phone and/or keys in the fridge several times. I put a tupperware full of ham in the dishes cabinet once instead of the refrigerator. Sometimes my brain just ins't working.

This weekend, my sleepless brain struck again. I went to make some pop tarts as a special weekend breakfast treat, but because I live alone, and no one is here to prefer their toast a different way than I do, I didn't check the settings on my toaster. I forgot that pop tarts and buttered toast like different settings. You can see below the results. 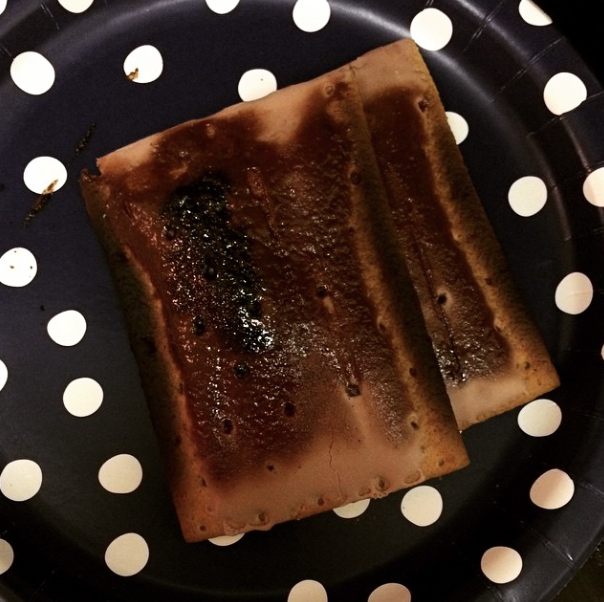 Don't worry. I didn't eat them. I gave up and had Cheerios instead.

Here's hoping your Monday brain didn't do anything as crazy as mine does on the weekend. Happy Monday!