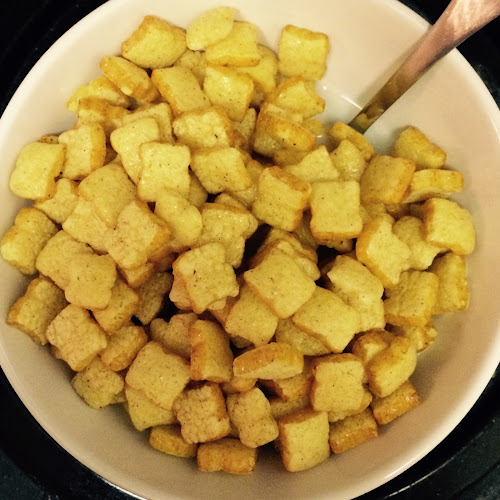 Growing up, for months at a time, I would eat the same breakfast every morning before school. I'd eat S'more's pop tarts for six months, and then one day I'd decide I wanted to eat a bagel. One such breakfast phase was French Toast Crunch. I don't remember how long this particular breakfast lasted, but if I'm judging by the others, I'd say at least a few months.

According to it's Wikipedia page, French Toast Crunch was discontinued in the US in 2006. Sometime after that, believe it or not, I actually went looking for a box, not realizing it no longer existed. Of course, I could have gone to Canada, but I didn't even realize that. Apparently I wasn't the only one looking for a box. In December 2004 (again, according to the Wikipedia page), French Toast Crunch was re-introduced to the American market.

Of course I didn't know any of this until my friend Sara texted me that she'd bought a box. My first thought was, "I didn't think that existed anymore."

So, in Target on Friday night, I saw that not only did they have several boxes for the miniature toast-shaped cereal, but it was on sale! So, of course I bought a box.

I'm ashamed to say that I woke up yesterday at 5:45, took Miranda for a walk, ate a bowl of French Toast Crunch, went back to bed, woke up again around 9 and ate another bowl. Yes, I ate two bowls of French Toast Crunch yesterday. I can only hope that soon there's a US women's Sumo Wrestling team. I will gladly join.

So, if you haven't fed your spinsterly desires this morning, perhaps you should consider a little mission to the store for a box of French Toast Crunch. It tastes like maple syrup and nostalgia. And isn't that what you want to start your Sunday morning?
Labels: cereal french toast crunch photo spinster food