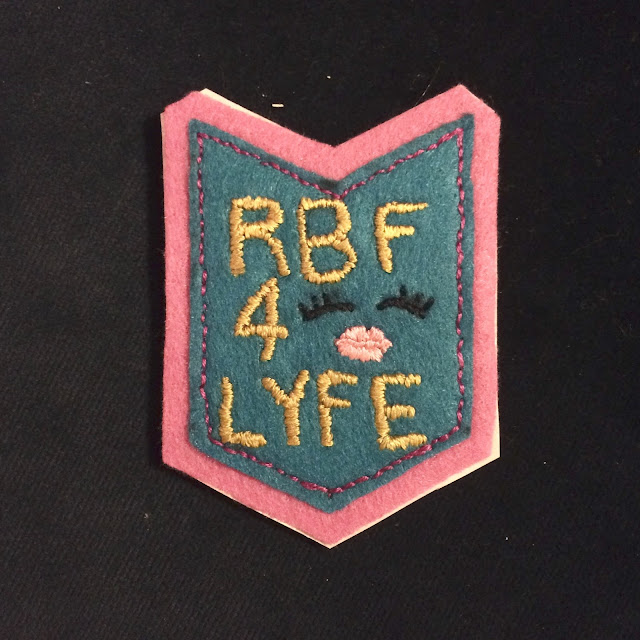 I was talking to a coworker the other day about all the slogans I'd like to just wear emblazoned on my chest. The only problem is that I don't want to just be wearing tee shirts all the time. Then, she had the best idea ever: Iron-on patches.

After Ivy suggested iron-on I seemed to see patches and pins everywhere. Miss Moss had an article recently about pins, Stylecaster had this article about wearing patches like a Street Style Star, and Ellen DeGeneres's new collection for Gap Kids has a two packs of really cool patches. I can't seem to find the non-alphabet ones online, though. I guess you have to get those in stores.

My first patch here was custom made to Ivy's specifications. Of course it looks very hand made. And of course I had some learnings. (That white thing in the back is the peel-off part to the iron-on bit). In case you're thinking of making some patches, here are some of the learnings I have to share:

1. Chalk pencils don't really work on felt.
I ended up having to use a Sharpie pen which created a little bit of a problem because then it needed to be covered up. I guess I should switch to the heat-dissolving markers.

2. Felt is Thick.
So, this is obvious, of course. However, that means the instructions on the back of the Heat 'n' Bond package aren't necessarily correct for this particular fabric. You'll need more heat and more time than they suggest

3. I need to work on my lettering skills.
But maybe it's at least a little charming that these letters look so home made

I'm sure there will be lots more to learn as I make more. Be looking for at least a few patches at my tables at the upcoming craft fairs! Hopefully by then I'll have it down to a science. Happy Friday!
Labels: crafting crafts DIY embroidery patches