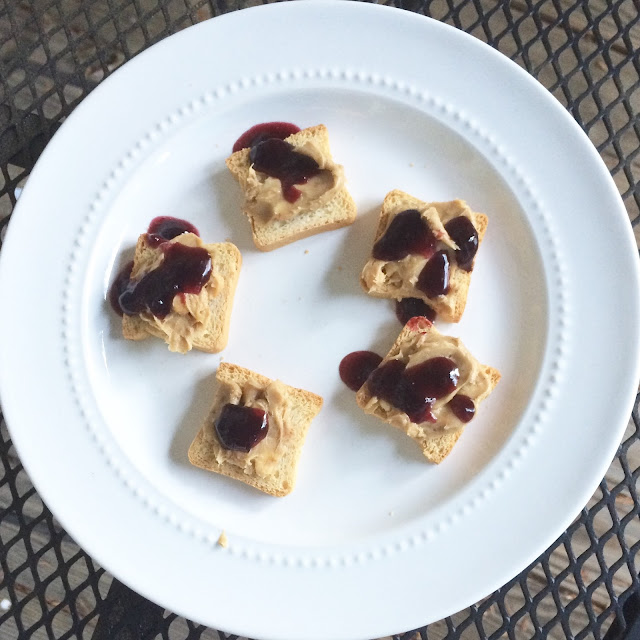 I can't claim I forgot to go to the grocery store again because I did, in fact, go last night. However, I was on a specific mission. I had been invited to a girls' get together at the home of my dog park friend, Meredith. So, of course, I got cheese, melba toast, sparkling apple cider, and sparkling lemonade. Of course I didn't remember that I needed breakfast food. So, this morning, I'm having an impossibly fancy breakfast of miniature crunchy peanut butter and blackberry jam toast. If this weren't a result of my absent-mindedness, I might even feel a little gourmet.

Whenever I think about peanut butter and jelly, I'm reminded of the restaurant that was on the ground floor of the offices at Tommy Hilfiger. The place was called Wichcraft, and while it was a bit too expensive to eat every day, they did have an incredible triple-decker crunchy peanut butter and seasonal jam sandwich served on large slices of sourdough bread. Heavenly. I believe working at Tommy Hilfiger was when I remembered how delicious a pb&j could be. It was also when I was my skinniest. So...perhaps I should start eating that again.

I delivered a portrait last night to the party, but I also met some really cool people. One of the women there had met with the Long Island Medium herself, and the story was really cool. Additionally, there was some delicious food. And now we need to talk about that.

1. Garlic Cheese
Whenever I go to a wine-and-cheese sort of event, I obviously don't bring wine because I don't drink wine and am therefore not in a position to choose wine. However, I do eat cheese, and I usually try to bring some of that. At the Fresh Market near my apartment, they have lots of cheeses from which to choose, and I am not a cheese expert, so I just chose flavor profiles I like. One of these happened to be a garlic cheese with a green rind. That's really all I remember about how it was named or looked. What I do remember, though, was that it was outstanding. It was a softer cheese - but not so soft as brie. I think it was probably a cow's milk cheese, but I'm just saying that because I don't like goat cheese and I did like this one...Whatever kind it was, though, it was delicious. So, if you're in the Fresh Market, get some.

2. Balsamic Cheese
I brought another kind of cheese that said it was a balsamic cheese. I love balsamic vinegar with every taste bud on my palette. This was a harder cheese, and it was sitting with the parmesans, but I don't think it was a parmesan. This, too, was good, but the cheese award for the ones I picked up goes to the garlic cheese, hands down.

3. Ceviche Guacamole Dip
The hostesses's best friend brought something I'd never had before, and I must say I absolutely loved it. I think it was something like the link above, but I'm not sure. It was dark. I just know it was very cilantro-limey, but it also had avocado and shrimp and probably tomatoes and some other things. Whatever it was, though, it was really good and fresh-tasting. I think this is a brilliant thing to bring to a party.

All right, spinsters. It is time for me to change into real clothes (of course I'm wearing my bathrobe as I write this) and head to an art fair in Sandy Springs. I shall report back to you with my findings.
Labels: cheese food guacamole peanut butter and jelly spinster food spinstergram